What a Time to be Alive! Life During Covid-19 and One Unintended Consequence of the 1918 Flu Pandemic

What a time to be alive!*

Today was the first day in what seems like eons (but is really only weeks) that I awoke in the middle of the night to pee and I didn’t feel fear. In fact, as I quick-stepped it to the toilet, I said out loud, “I am tired of being afraid.”

It’s easer I bet to feel like this given my circumstances: Although I am in that age group that some view as expendable, I don’t feel particularly at risk. I am not a healthcare professional on the frontlines or living in an area of density or a delivery person. I have not traveled recently. My contact with my fellow humans has been sorely curtailed. Still, I feel the rumble of the drumbeat in the background, the uncertainty of how bad things are going to get. At the very least, it’s dire for a lot of our fellow humans. Jim and I tear up watching the PBS Newshour stories, especially ones featuring refugees or prisoners, unable to physically distance.

We humans are not built for this level of uncertainty.

But is that really true? Maybe we are. Maybe it’s one of those qualities we all have embedded deep within that lies dormant until circumstances like a worldwide pandemic activates it—if we’re awake to that. Hell, if I know.

Meanwhile, we are going about our lives the best we can. Jim is more focused than I am. It helps that he has a full-time job to hold his attention. I count it a victory when I shower and brush my teeth before noon. I step up my connections with Unity, adding prayer gatherings at noon on Tuesdays and Thursdays via the phone. 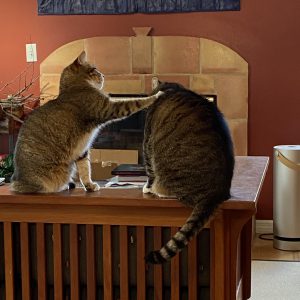 I count our blessings: his job, enough food, animals we adore. Cayce and Catsby have not altered their behavior one iota: they sleep, eat, play, groom and repeat. They recline on and near us as we watch TV at night. We love them; they love us. Cay runs after Jim on his way to brush his teeth and leaps on the bathroom counter for last pats before bedtime.

Post spring-break outrage, the beach now has restrictions. But the restrictions  are confusing, I’m not sure what applies where. A Cocoa Beach cop tells me, “We are trying to stop people coming over from Orlando.”

But what is true is that the beach is still open at my favorite time: in the evening, in the gloaming when the sky drops blue and picks up pinks and lavenders and sometimes yellow tinged with red. 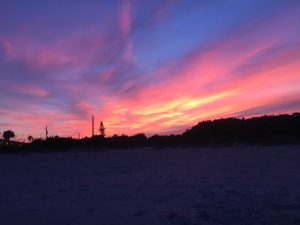 The sun hangs over treetops across the road. 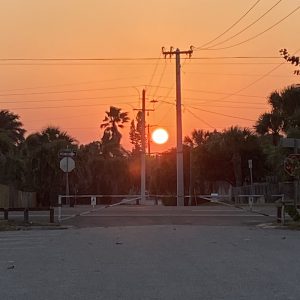 The numbers are down, no doubt about it. There are a few spring breakers, but mostly it’s the regulars out there, like Ray, who could never remember my name until I told him that Beth, was short for Mary Elizabeth. Now he shouts, “Hello, Mary Elizabeth!” when we pass each other.

A few nights ago, the local guy, characteristically clad only in shorts, who rummages through the trash cans and climbs into the large, green dumpsters to toss out aluminum cans and plastic bottles and has never, ever established eye contact or spoken a word to me in years, said this as I passed him on the short walk off the beach to retrieve my bike locked near a trash can he was about to rummage, noticing my metal trash picker and bucket: “You should bend over to pick up trash. It’d be better for you.” 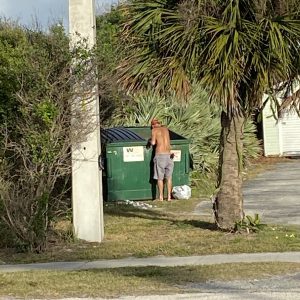 Hmmm. Interesting huh? I’d like to say that I just smiled and shrugged it off. Instead, I said, “I bend over plenty.” Oh my! Sounds sexual, doesn’t it? But he didn’t comment or show any sign that I’d spoken and instead said, “I need that bag,” and grabbed the plastic bag out of my hand.

Actually, on further reflection, he has a point and I bet my belly might be a tad less poofy if I did bend over, sometimes hundreds of times in a walk to pick up plastic bottle tops, bits of plastic and old bags of stinky bait, but really who wants to pick up nasty trash like cigarette butts and condoms and dirty diapers, etc. with their bare hands? Think I’ll stick with the picker.

Trash guy reminds me of how fortunate I am in these uncertain times. Yet still I worry, especially about Dad, confined to his retirement community in upstate New York. Recently, he was fretting about a grocery delivery due in a couple of days, a first-time service for him, a change in his routine. He, like our cats, like the spouse, DOES NOT LIKE CHANGE. He said that he’s afraid that the workforce may strike, but I wonder if maybe his anxiety is more about how he’ll get the groceries from the front desk drop-off to his second-floor apartment using his walker. Given his physical frailty and his leaky aortic valve, he has reason to be concerned. It’s actually an easy problem to fix: all he has to do is ask for help. Why is that so hard?

In between the fret, Dad said something really interesting in this conversation, almost in passing. He said, “Without the Spanish flu, you wouldn’t be here.” What?!?!? He went on to say that my grandfather’s first wife had been killed by the Spanish flu (which actually started in Kansas), and if that hadn’t happened, William Sr. would not have met and married my grandmother and had four sons, including my father, the oldest, who married my mother who then had four pregnancies, three to term, including me.

So, while it’s clearly tone deaf and insensitive to say that there will be “good” to come from this current pandemic, there will be, even at the unfathomable cost of immense suffering.

What a time to be alive! I look forward to all those stories just waiting to unfold.

Please share your stories, your thoughts, feelings and coping mechanisms. I always love to hear from you!

3 thoughts on “What a Time to be Alive! Life During Covid-19 and One Unintended Consequence of the 1918 Flu Pandemic”