The Itch in Cocoa Beach, Florida

“It” started about two months ago. “It” is for itch, a full-body, no-rash itching – what I imagine our cats felt like after we adopted number three, Catsby, who in addition to disturbing the equilibrium established by the resident cats, Cody and Cayce, turning the once good-natured Cody into a hissing, angry ball of yellow fur (reinforcing the truism that cats do not like change) brought a raging case of fleas into his new home. His fleas multiplied quickly and jumped onto Cayce and Cody and set them a scratchin’, leaving round bald spots on Cay’s silky ears. The fleas resisted our efforts to eradicate them and required a full-house fumigation from the pros. No one, no living creature, was allowed inside while the pesticides killed the fleas. We erected a big tent on the back patio for the cats, which required a lot of back and forth into the house to get this or that tool and when we took our focus off of Catsby, he managed to stick either his head or paw through the top of the carrier and unzip it far enough to escape, a feline Harry Houdini. He just vanished! This resulted in much angst as we combed the neighborhood calling out, “Catsby, Catsby,” feeling increasing dread as time went by with no sightings. We hated approaching busy A1A, fearing we’d see him squished in the road. But after a few hours of searching, Jim had a feeling that the cat had not gone far, and sure enough, he was hiding deep in a pile of Styrofoam and art materials on our next-door-neighbor’s patio. Before Catsby could dash off again, Jim put a death grip on the scruff of his neck, yanked him out, carried him home and plopped him in the tent, zipped it up securely, and one of us stood guard until it was safe to go back into the house. 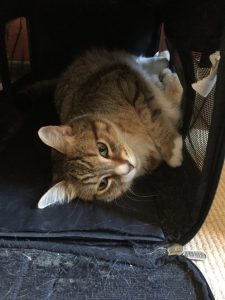 However, I do not have fleas. I almost wish that I did.

For a few weeks, I practiced my husband’s mode of operation when it comes to unpleasant health issues. I ignored it (which in all fairness is often a good strategy as many, if not most of our ailments, have resolved on their own). However, this hasn’t been one of them. Maybe it will over time but here’s what drove me to the local walk-in clinic late on a recent Sunday afternoon. I couldn’t sleep. I had trouble getting to sleep and then when I did, I’d wake up scratching, before falling back into a fitful nap until once again waking itching. You get the idea of the reiterative cycle.

And I don’t know about you, but a lack of sleep makes me a crazy person, easily unhinged – with sharp edges and barely suppressed road rage, my already fragile grip on good cheer as hard to hang on to as those fleeting moments of low humidity and a cooling breeze here in Cocoa Beach.

When we first moved here, over fourteen years ago (hard to believe), I figured temps would drop by Labor Day. Ha! Ha! Neighbors laughed. Then I readjusted my expectations and expected that along with the ghouls and goblins ringing our doorbell on Halloween that surely cooler temps would reign, but no, not so. I felt sorry for the kids dripping sweat onto their fistfuls of candy. So now I don’t count on a cool-weather reprieve until Thanksgiving. Just how did people live in this state before air conditioning? Well, not that many did, and additionally, this county, Brevard, was originally named, Mosquito County. Suffocating humid heat and swarms of biting bugs. Not exactly a marketing draw, is it?

Sleep deprivation is what drove me to beg for help. On that recent Sunday afternoon, the parking lot at the clinic was nearly empty as I pulled in, parked in the shade, and walked into the frigid air of the medical office where the receptionist was studying an anatomy book for an upcoming exam (training to be a nurse, it turns out) as a Harry Potter movie played in the background. I was whisked back in minutes as closing time loomed and the nurse practitioner asked me a bunch of questions and occasionally even looked at me for a few seconds in between typing into a laptop. A few minutes later, she said, “Get tested for allergies, don’t eat any fish, keep a food diary,” and called in prescriptions for a body oil and an antihistamine for pick-up at the Publix pharmacy across the parking lot.

Turns out the oil is moderately soothing, the antihistamine is maximally soporific (and makes me non-functional) and I’m doing the rest of what she said, dutifully noting my food intake. Meanwhile, since I already had an appointment with a dermatologist for a suspicious “lesion,” I added the itching to the list for review. The nurse practitioner there, a brusque, no-nonsense type, who I swear must have trained with Nurse Ratchet said this, “You have very dry skin and you are getting old.” Essentially saying: Case closed. Live with it.

Since it’s been two years since I’ve seen my general practitioner, I figured maybe it’d be a good idea to get blood work so I did, which showed about a zillion normal readings (hooray!) except for too-high LDL, so no additional information gleaned there (like hypothyroidism). Then I called the two practices in the county (in a county of nearly 600,000 people, mind you) that actually do allergy testing to be told that neither deals with skin issues. Grrrrr!

So, unlike fleas, there is no quick remedy. I pause here while typing, to scratch.

So, like I’ve done in the past, I sought guidance from less conventional sources. I snatched my Louise Hay from the bookcase in my room and here’s what she says in her book, Heal Your Body, A-Z, The Mental Causes for Physical Illness and the Way to Overcome Them, on page 57.

Probable Cause: Desires that go against the grain. Unsatisfied. Remorse. Itching to get out or get away.

New Thought Pattern: I am at peace just where I am. I accept my good, knowing all my needs and desires will be fulfilled.

Well, that gives me a bunch of stuff to ponder in future posts. Meanwhile, in fewer than 48 hours, I have a 10:30 appointment with an acupuncturist and traditional Chinese medicine practitioner, and while they caution in their paperwork to not expect miracles, I hope that I’ll soon get some kind of relief.

Reader’s Invitation: I would love to hear anything you have to share about hard-to-resolve issues you may have experienced or are experiencing and are willing to share. Regardless, thanks for reading. Your interest and support mean the world to me.

1 thought on “The Itch in Cocoa Beach, Florida”