Weird weather. Squally one minute, sunny the next. Gray sky, blue sky. The wind flings palm fronds down on the driveway. I slip into Jim’s office, plop on the bed and pull a couple of pillows under my neck. Even under normal circumstances, there’s only one chair in the room. It’s an Ikea knock-off, light in weight and sleek in line, but a disappointment comfort-wise, and subsequently, mostly a place for the cats to lounge. But today it is piled high with porch furniture we do not want to become dangerous projectiles when fiercer winds hit.

“It’s better,” Jim says, the “it,” of course, referring to Hurricane Dorian, which now looks like it is going to stay off the coast of central Florida. However, most news stories say Dorian is still “dangerously close” to us. Jim then proceeds to pull up a screen on the computer and give me the latest data about what we can expect: the strength of the winds, the level of storm surge and a general time frame of when conditions will worsen.

There are still a lot of unknowns, of course, Dorian could defy predictions. It’s happened before with storms, but generally to our advantage. When Matthew was barreling straight towards us in 2016, we evacuated to north of Orlando, but a last-minute wobble spared a direct hit.

It’s been a week of unknowns and for me, high anxiety. I say to my father Sunday afternoon in our phone conversation, “I wish I had more of the personalities of my brothers, but I don’t.” They are more of the go-with-the-flow type and let’s just say, that’s generally not a description anyone would use to describe my high-fret personality.

That high fret is out in full-force over the last few days. I don’t just cut short a trip to D.C., I don’t just trim it, I butcher it.

Was it just last Thursday that I leave Orlando for Washington? Golly, it seems sooooo long ago. That’s one more thing storm-worry does; it distorts time.

The plan was to fly up Thursday, specially to attend the Library of Congress National Book Festival all day Saturday, visit the National Museum of African American History and Culture on Sunday, and the Newseum (closing in December) on Monday before flying home on Tuesday.

I get up to D.C., no problem. As I glide up the escalator at the Foggy Bottom Metro stop, I hear someone singing with a distorted amp long before she comes into view. It’s a busy scene on the sidewalk, food vendors, students, medical personnel, people of many colors, speaking many languages, milling around me as I stand waiting for the Walk sign to cross bustling 23rd Street. My suitcase thumps over the rough sidewalk as I pass the library on the campus of the George Washington University. I stand to the side in the narrow alley by the fire station to let students squeeze by me, and grunt as I haul my belongings up the steps to the hotel. I check in and within an hour, I whoosh in to the air-conditioned lobby of National Geographic, waiting to buy a ticket to “Queens of Egypt,” where I happily roam for the next few hours, finally sitting for a few minutes to watch a video about the surprisingly lengthy process of mummification. Those Egyptians sure went to a lot of trouble to preserve their royalty. 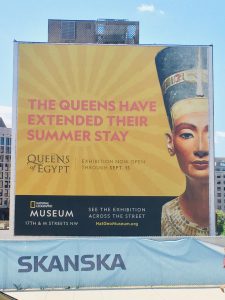 In between a full day-and-a-half at some of my favorite D.C. museums, the Phillips Collection in Dupont Circle (their migration show a tear-jerker), the Renwick Gallery near the White House (the talent of American craftspeople astounding), the Building Museum, at Judiciary Square (a highlight is “Flickering Treasures,” a history of Baltimore as told through their movie theatres, palaces and art houses), I read the news about Hurricane Dorian. 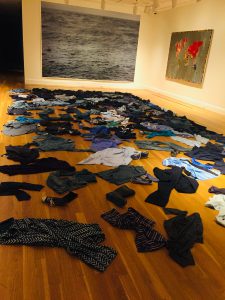 From the migration exhibit at the Phillips Collection 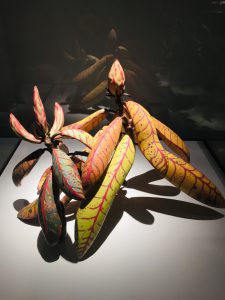 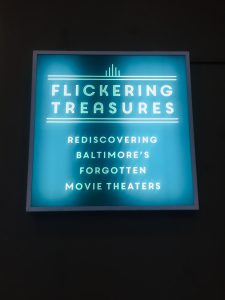 At the Building Museum

The News About Hurricane Dorian

It is not good. Several models show H.D. heading directly for Cocoa Beach, or at least the coast of central Florida. It is scary, the intensity, the mandatory evacuations for those of us who live on barrier islands, the projected closing of the Orlando National Airport, the unknowns.

The unknowns. That’s the worst part. What I play on a loop in my head is something like this:

Remember how the flight attendants wince when you say that you are not returning until Tuesday. Remember how your gut clenches.

Jim will not be able to come get me or it will be pure hell because the roads will be packed with everyone fleeing the coast and then they (some anonymous authorities) will close the causeways and we won’t be able to get back to our cats and the storm will hit and blow off our roof (even though it’s only a year old) and they will be swept away.

Or some version of the above that always leaves me separated from Jim and the cats, my most precious boys.

And then I start to worry about that because the subway doesn’t open until 8:00 a.m. on Sunday which is too late for me to count on to get me to the airport on time, which means I have to take a cab which is no big deal, but then Jet Blue sends an alert warning of delays for drivers because of lane closures and so I move up the cab to leave even earlier, but then more bad news comes in about Dorian and I change the flight again, this time to Saturday at noon.

Thirty-six of us fly back to Orlando on the flight, which is quite pleasant with my own row and two packages of terra sweets and blues, except for a bumpy descent, but that’s to be expected since there is a powerful hurricane not that far away. The Orlando airport is a mob scene, you can feel the anxiety, as kids stream by wearing Mickey Mouse ears, their parents toting their Disney merch, everyone desperate to get the hell out of Florida.

I cling to Jim in the airport until he pulls away and says, “Okay, that’s enough. Let’s go.” 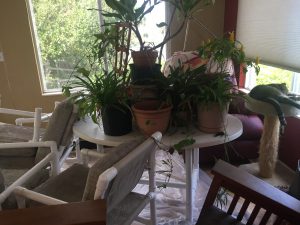 Cayce lounging among the porch furniture 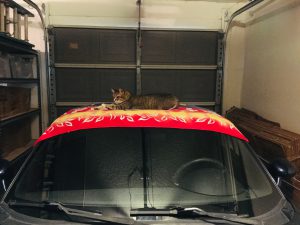 Catsby hanging out on Beth’s Mazda 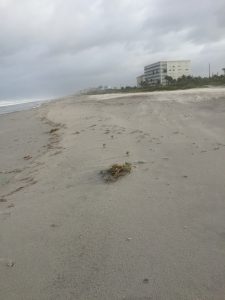 Then it’s the usual storm prep back home: haul in all the plants and park the cars in the garage (much to the cats’ delight), and stock up on paper towels and toilet paper (really) and batteries and flashlights and stuff the window wells that leak with towels and catch the frogs and lizards that accidentally come in buried in the porch furniture cushions before the cats get them, and pile up cat crates, a litter box, litter, food, rabies and shot records, our valuable papers, a few pieces of jewelry including my mother’s wedding ring in case we have to go to a shelter and yak with neighbors and feel good about our decision to stay and then yak with neighbors a little later and start doubting our decision to stay. Mostly, though, we just go about our days feeling a general unease watching the weird weather going on outside. 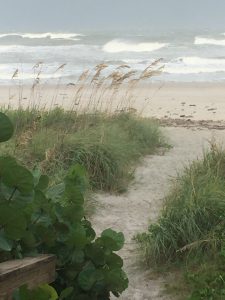 After dinner, Jim and I walk over to the beach. It is sunny when we leave, two minutes later our soaked clothes cling to our bodies.

I leave Jim and pad up the stairs to shower. As the water beats against my skin, I feel lucky to wash off my storm-prep sweat. This might be my last shower for a few days; you never know when we’ll lose power and water. It was five days the last time during Irma. Through the bathroom window, I watch the branches whip in the wind while rain pelts the windows. I turn off the shower and hear the whoosh of the wind. As I towel off the sun shines.

Reader’s Invitation: I always love hearing from you. Please share whatever strikes you. I will generally respond to your comments within 24 hours.

2 thoughts on “Waiting for Dorian”