Once upon a time long, long ago my parents danced. This rare event took place in our home in the room downstairs that we called the playroom. This concrete-block room, cool in the summer, cold in the winter, was the site of a multitude of activities, some play-related, some not. For at least part of the year, we set up the ping pong table and various configurations of my family volleyed the ball back and forth over the net in close, competitive, cut-throat games. The steady cadence of the ball slapping the table rang throughout the room, accompanied by involuntary grunts of effort and frustration and the occasional, “Yes!” after scoring a particularly hard-won point.

To get to our playroom from the outside of our split-level abode, you’d enter through our front door and take the stairs down. If you stayed straight, you’d walk into the furnace room dominated by the oil-guzzling furnace and shelves of canned food. If you turned left, you’d walk into the two-car garage and see the snowblower and bicycles lined up in a middle aisle between the two cars and a snowy-white freezer chest snug up against the wall. Planning for an upcoming meal, my mother would send one of her three kids down to retrieve something from that big, hulking freezer, large enough to hold a cadaver, perhaps a container of her homemade vegetable soup, or a blueberry pie made with the fresh berries we picked across the road along the railroad tracks. My mother also made her own applesauce, the sweet aroma of boiling apples filling the kitchen as she lugged the press out of the cabinet. And she made her own root beer. We’d form a mini-assembly line to fill and cap the bottles and then haul them down to the furnace room and lay them on their sides to age. Sometimes we’d hear a pop and discover that a bottle had blown its top, sticky sweetness spreading out on the floor like some weird Rorschach blob begging for interpretation.

But back to the dancing. The night I recall my parents dancing, Chubby Checker was blaring from the stereo and my parents did the twist, hips and knees swinging side to side, rising and falling, gyrating their bodies to the beat of the music. The twist was easy to do, even for the dance-challenged, which we all were, and I remember the energy in the room shifting high, high, high to unbridled exuberance and joy for just a few minutes. I leapt in to join them, my pedal pushers giving me ease of movement as I too swayed to the beat.

But that was an unusual occurrence. My parents were never big on dancing, and perhaps that’s part of the reason I am not either.

But I bet too it has something to do with an unfortunate incident at a company affair when a friend made fun of me when I danced. She also made fun of me when I threw a ball at a company picnic, so perhaps, I should have re-evaluated that “friendship.” But, I didn’t, and it endured (and flourished) for over two decades until one day she vanished from my life with no explanation. Repeated overtures to connect on my part were ignored and finally I gave up. This stung for a long time–it still does, really. Even many years later when I visit D.C., I sometimes think I see her on the street, and my heart quickens, but then as the woman draws nigh, I see that, Nope, it isn’t my old friend, and I feel a mix of both disappointment and relief.

While some may say I am too sensitive (and I would not argue with this assessment), at least partially based on her ridicule, I told myself a story that I could not dance and looked ridiculous doing so (and very well may have, Elaine in that infamous 138th Seinfeld episode in the eighth season, “The Little Kicks,” seared in my brain). But, lately, I’ve been reexamining this story (and questioning whether it’s true), partly because I’ve been writing about it in an essay in a forthcoming collection and partly because our local library was offering a Line Dance Class for beginners.

That could be fun. I was drawn to the beginners, no-experience-necessary part, and that it was an indoor aerobic activity in a/c (Florida being a damp mess of high temps and even higher humidity this time of the year). So, with just a teensy bit of apprehension, on May 2, I joined about 30 others in the Community Room at the Cocoa Beach Library to learn a sampling of line dances from Patti, trim and fit in Capri jeans and tee, gorgeous silvery-white hair cut in a blunt, banged bob.

She welcomed us neophytes as well as a couple I would soon see already knew how to line dance (their cowboy boots a dead giveaway). We slipped our payment, a mere $5, into the boot on the table near the sign-in sheet and then took our place in three long, parallel lines. 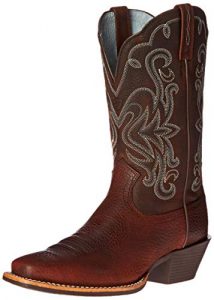 The group was and has remained nearly all female and shrunk over time, now averaging 6-10 of us stalwarts on Thursday afternoons at 1 pm.

With infinitely-patient Patti as our guide, we’ve learned and practiced the Electric Slide, Cupid Shuffle, The Cowboy Shuffle, The Cowboy Charleston, and other dances using cha-cha, Charleston and grapevine steps, toe taps, slides, shuffles and ¼ turns. If I stay focused on the beat (no small thing) and count to 8, I do okay. Not always great, but okay. In the last class, I got cocky, thinking to myself, Gosh, look at me, I’m doing fabulous, and right then, in that moment when I dropped my attention, I lost my place in the sequence and then everyone behind me in line, including Patti, also lost their place in the sequence. If we were dominoes, we’d gone down.

Learning something new is humbling. And it’s a bit alarming that I retain so little week-to-week, but that’s not entirely true, I settle back into the dances faster and more easily with each passing week.

We old and older ladies murmur encouragement to each other. We are decidedly non-competitive and we laugh—always with—and never at each other.

Reader’s Invitation: Got any dance stories? Or any others of learning something new and taking a chance? Do tell. I’ll usually respond to your comments within 24 hours.