Another Worst-Case Scenario (in my mind)

“Ladies and gentlemen, we are going to hold up on the runway for about 20 minutes. Weather has moved into the Albany area…”

So, hold up we did on the runway in Orlando in our commodious Jet Blue seats, Jim on the aisle and me on the window, luxuriating in the empty middle seat between us. And here’s what my mind screamed at me:

Oh, my God! You are going to die buffeted about by wind shear when trying to land in Albany. And you forgot to tell Dad or your brother Bill who is taking care of the cats and even though it’s the same people who have done it for the last 14 years, who knows if they’ll remember their names or be able to find their phone number when the plane goes down. What will become of the cats?

Images of Catsby’s and Cayce’s bodies wasting away to skeletons flitted across my mind screen. Although truthfully, chubby Cayce could probably last a good long time on his fat reserves as long as the water held out. 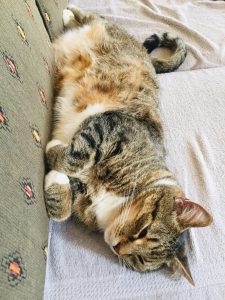 While my thoughts instantly slammed into full-catastrophe mode, here’s what Jim told me his first thoughts were when he heard the same announcement:

I hope I have enough charge on all my devices to accommodate any delays.

Wow! And there you have it! Beth versus Jim. What a different internal compass we use to navigate the world.

I know, however, that I am not alone in my tendency to catastrophize—and take some solace in that. One of my favorite authors, Anne Lamott, recently got married and I read about her wedding in the Sunday New York Times. The article said this about Anne and her new spouse, Neal Allen:

Clearly, Anne and I are soul sisters and Jim and Neal soul bros. 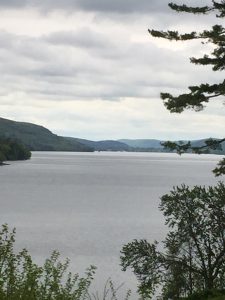 But let me return to our recent trip to upstate New York, a reschedule from February when our sweet cat Cody was just too sick to leave. Currently, still not feeling sufficiently chipper to take on the demands of New York City, we instead opted to spend more time upstate and head west to the calmer pleasures of Cooperstown, before settling in Saratoga Springs to hang out with Dad and Bill. 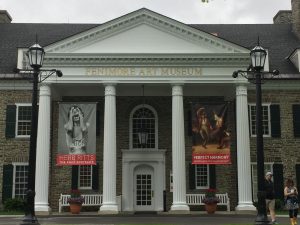 A Calmer Pleasure in Cooperstown

And as it turned out, our niece Allison, was home for a week after graduating from New York University. If we were willing to drive farther west a couple more hours to my brother and sister-in-law’s home, we could join the celebration for her on Saturday.

So that’s what we did, driving through the hills of central New York and along lakes where gray clouds hung overhead. A few miles out of the village of Skaneateles the rains came, dashing any plans to stroll the charming downtown. We settled instead for just a quick pee at the local library before showing up at their home. 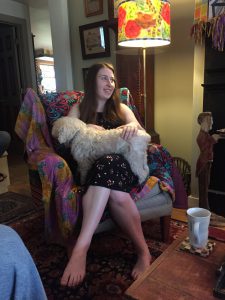 When the rain stopped, and the clouds cleared, the sun shone brightly and reveling in the low humidity, we sat outside watching the dogs play, resident schnoodles Ricky and Emmy, and their visitors, Jake and Lady, although Lady was a bit crabby baring her teeth and growling at Ricky and Jake. After a couple of hours, we left, not because we wanted to particularly, but because we’ve learned over the years that it’s always good to leave sooner rather than later and I was feeling the tug to get to Dad, visiting the pater the primary reason for the trip.

White-knuckling it with palms sweating and uttering little, involuntary mews of concern on the busy highways around Syracuse, I relaxed once the traffic lightened up on the Thruway. Soon I felt solid as a rock as we zipped through the verdant foothills of upstate New York.

That struck me as curious—the relaxing. Was it because this landscape is a better fit for me (mountains and lakes versus the flat, flat land of Florida) or was it because it was so familiar, reactivating childhood imprinting, that I found it comforting? I do not know. 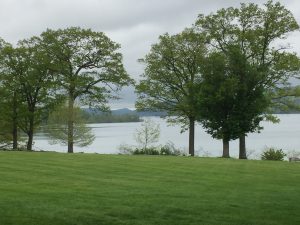 Like on any trip, Jim and I got tired of being together and sniped at each other over really important things like him drinking a second soda in the same day. Imagine—what a transgression! (Please God, do not inflict me with “real” problems.) But we laughed too, and not long afterwards, and made jokes about it and I doubt in the future if I will ever again criticize his root beer consumption habits while on vacation (or at least that’s the hope). 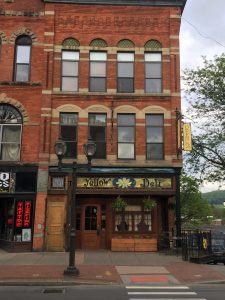 And there were real highlights. I read recently Jeff Daniels misses his family back in Michigan while he is in New York City performing as Atticus Finch in “To Kill a Mockingbird” on Broadway eight times a week (including through a multi-day bout of flu). He said that there is nothing he’d rather do than spend time with his family. And, you know what, on this trip I really enjoyed my family, in all their configurations—the Tom Lambdins and their animals in their natural habitat, Dad alone, Dad and Bill, and then on Sunday, all eight of us together. Good cheer rang out through our peals of laughter as we caught up and told stories drawing on our shared history, new beginnings, and nearing endings. 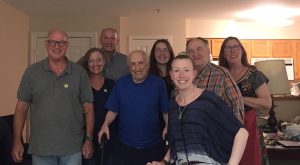 At the end of the visit two days later on the way to the Albany airport, I felt a familiar pull to live closer to my family. Sometimes I feel so remote and disconnected in Florida.

It was 57 degrees and rainy in Albany and at the airport we sat on the third floor on wooden benches without backs near the room reserved for the military where we could peek in and see comfy recliners with crocheted afghans lying on their arms. Rain pelted and streaked the floor-to-ceiling windows as a guy nearby randomly squealed in between muttering to himself. Then we cleared security in about a minute and took off on time, landing in Orlando where it was 97 suffocating, humid degrees.

After retrieving the car, shedding layers of clothing and driving an hour, we pulled into the driveway and rushed into the house, leaving the luggage behind to retrieve in a few minutes, turned the key in the lock, shoved open the front door with the rubber insulation dragging across the floor like it always does, bounded up a few steps, and looked up to find Catsby and Cayce waiting for us at the top of the stairs.

Reader’s Invitation: Can you relate? How? Please share your imaginings of doom and/or things working out. Or comment on anything else that strikes you. I will generally respond to your comments within a day.

6 thoughts on “Another Worst-Case Scenario (in my mind)”