After the Rainbow Bridge: Mending a Broken Heart When Pets Die 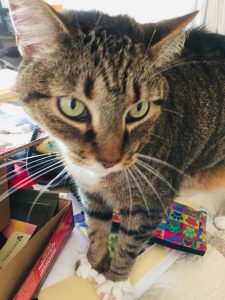 It is a little after 3:00 p.m. and Cayce just ran up the stairs to the third floor at a surprisingly fast clip for a chubby boy, after standing in the middle of the living room bellowing his guttural two-part meow. He’s been doing this strange meowing several times a day since Cody left us three weeks ago. Is he calling for him? It’s got to be weird for him, and Catsby too, to suddenly have one of your buddies gone after ten years together.

A few days after we euthanized Cody, a well-meaning acquaintance grilled me on how we did it (at our long-term vet’s office) and suggested that a “better” way would have been to have a vet come to the house so that the other two could have a more direct experience of it and see (or sniff) his lifeless body. As I said, she meant well.

But I don’t want write primarily about Cody’s death. Instead I want to talk about what’s happened since he’s been gone, and say “thanks” to everyone who has been so kind to us.

A lot has happened. And that’s not even taking in to consideration all the “stuff” that goes on in the inside of my oft, overly-active brain; all the conversations, the flights of fancy, the retorts, the suggestions, etc., that take up my waking, semi-sleeping and sleeping life. This focus is on the external world.

My older brother, Bill, vacationed and returned from the south of France. He is a frequent and intrepid traveler, accelerated in pace since retiring from his thirty plus years as a TV reporter for station WNYT in Albany, NY. Turns out that his plane to Paris was overbooked and the gate attendants first offered $1000, then $1200 and then $1500 to anyone willing to give up their seat and wait for a later flight. Bill snapped up the offer when it hit $1500. As he said, “The amount was more than I was paying for the whole trip and I like the sense of adventure that trying options affords.” Mostly, I mention Bill because I was worried about him. He was flying right about the time the second Boeing plane crashed in Ethiopia.

Jim and I visited long-time friends from up north vacationing down south in Boca Raton, a busy part of south Florida, about 2½ semi-harrowing hours down charmless 95. I feel bad for Jim, the driver, as I am one lousy passenger, jittery and jumpy and fake-braking in the seat next to him, whenever he gets too close to the car ahead (often), or someone flies by on the right or the left cutting it too close for my comfort (twice). Vigilance is required but my hyper-vigilance cannot be pleasant to be around. 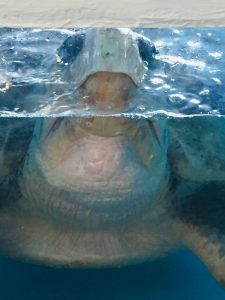 Upon arrival, they hugged us and fed us, and as a quartet, we visited Gumbo Limbo, where enthusiastic volunteers told us about the turtles in rehab and about the personalities of specific fish in the aquarium. We Floridians love our sea turtles.

Our friends were kind and stimulating company as always, and after dinner, around 8:30 p.m., with blessedly lighter traffic on 95 we headed home. Both Jim and I looked for our greeter-cat, Cody, in the window by the front door when we pulled in the driveway.

I had 8:00 a.m. root canal follow-up appointments on #8, the front right tooth, which is still feeling weird, not like it was before the procedure, but still thrumming with sensations. I tap on it and it isn’t pain exactly, but it definitely doesn’t feel like my other teeth. The regular dentist didn’t want to put in the permanent filling until I went back to the endodontist, so I did, and he said, “I’m pretty confident that it’s normal healing, go ahead with the fix.” Still, I don’t feel much relief, physically or emotionally, and imagine that the crown falls off the tooth and the drilled-down tooth is cracked and there I am for x period of time with some exposed nub of a front tooth, like some hideous Jack-o-lantern.

Mostly though I dragged myself out of a dark hole that was seductively calling me to come down and curl up in and stay—to separate from the world—for a time. I don’t want to alarm you, I was not contemplating any kind of permanent leaving, but this fuguey in-between, was marked by intervals where I functioned more or less “normally,” going to yoga, cooking dinner, bringing in the mail, riding down 95, etc., followed by a fatigue and sadness so debilitating that I only changed out of my fleece pjs in the afternoon because I was embarrassed about what the neighbors might think when I walked to the end of the driveway to get the mail. Tiny actions: paying a bill, brushing my teeth, throwing away unread newspapers, felt like significant victories.

“I didn’t realize what a ballast Cody was for me,” I say to Jim. He misses him too. We all do. When Cayce does his calling, I wait for him to stop, and then say, “Cay, I miss him too.” And I pet him and lay my head on him to wait for the soft purr I know is coming. 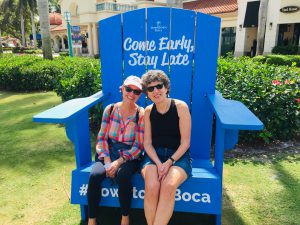 Nedra and Beth in Boca Raton 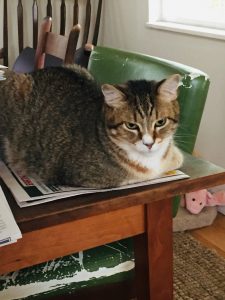 But even though I said this posting wasn’t going to be about a dead cat, it sorta is, isn’t it? But mostly what I want to convey is how much I appreciate everyone in our many spheres for their kindnesses: Nedra and Bruce, our Boca buddies for providing a day of meaningful human connection (and distraction), our vets for remembering Cody with a plant I pray I won’t kill and a donation to a feline medical research foundation, our elderly neighbor for enveloping me in a hug, all the Facebook likes and comments, the cards and calls from family in Illinois and friends in Tennessee, Arizona and North Carolina, the texts from my artist sister-in-law checking in and sending a shot of her latest creation (often full of animals), for Jim, who never tires of talking about Cody and misses him as much as I do, and for our other two cats, Cayce and Catsby, who fill our house with unique antics (and bad behavior, talking to you, Catsby, sitting on the dining room table) and of course, the healing power of glorious nature: the ducks gliding across the pond in the back, the wind whipping the palm trees into dancing frenzies, and just a couple of days ago dramatic gray skies throwing down pellets of ice in a rare hailstorm. There is so much to be grateful for. 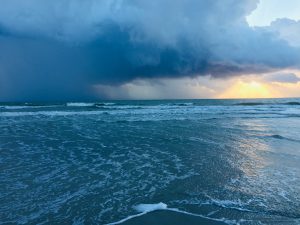 I swear I can feel my heart mending. It’s like tiny, invisible paws are knitting it back together. Family and friends on vacation, dental woes, the messy process of grief, interrupted by wind and rain and brilliant sunshine. Life goes on.

Reader’s Invitation: I’d love to hear from you. Is there anything in particular that struck you in this posting? I will generally respond to your comments within 24 hours.

7 thoughts on “After the Rainbow Bridge: Mending a Broken Heart When Pets Die”