Art at FIT, French Kiss, and The Final Straw

A raw day. Cold, windy, soaking rains on the way. Got a warm cat and a good book to read but there’s an interesting show opening today at the Ruth Funk Textile Museum, a big, tan block designed to withstand gale force winds, smack in the middle of the campus at the Florida Institute of Technology (FIT).

Forty minutes later (including ten driving around looking for a parking space), I walk up a flight of stairs to the main exhibit, where there’s a guy in tan cargo pants sitting on the bench inside the door with a clipboard on his lap. 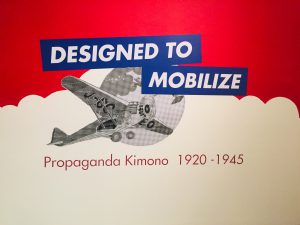 He brightens. Dave and I shake hands. He, a military historian, is there to talk about military motifs in the featured textiles and give us an overview of U.S.-Japanese relations leading up to WWII. We chat as a robust crowd gathers around us. He tells me that his sweetheart done him wrong, that he’s recently moved and that they each took a cat (he has Mars, named after the planet, not the war God) and that he’s lost thirty pounds. I note his self-confessional bent; this is a guy who obviously feels deeply, and I bet he’s going to be an effective speaker, good at connecting with the audience.

The tour begins, and he’s pretty good. He punctuates his talk with a couple of corny jokes, a few props (a kamikaze headscarf he whips out of his cargo pants pocket to tie around his balding head), and elicits a few gasps from the docents when he taps his pointer with a little green hand on the end directly on the fragile fabrics. He tears up when he recounts that he’s been shot down several times–and yet he’s still here. I think of Mary Oliver (who recently died), who asks in her poem, “The Summer Day,” what is it you plan to do with your one wild and precious life? I wonder how Dave would answer that? How would I? How would you?

There’s a station near the end of the exhibit where the public is invited to make origami cranes for peace. 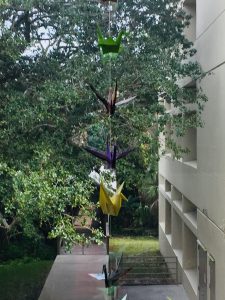 I tramp around the campus. I’ve been here numerous times before but never around the entire periphery. The campus is mostly deserted, but there’s a guy about a quarter-of-a-mile away I spot by his loud voice, he is on his cell phone. I am scouting future parking spaces, since public parking is always an issue on this campus. There’s a parking structure up ahead, but as I draw nigh, I see that the sign says it’s reserved for residential students. Where are they? I follow a concrete path from the parking structure into Columbia Village, pass mailboxes and a laundry room, which opens into a warren of residence halls, scores of bikes out in front of each. Two students, one male, one female, lug green duffel bags stuffed with dirty laundry.

“We are so lost,” says a couple I recognize from the gallery talk. I point them in the right direction, feeling all smart and helpful. Then I continue on my way, invisible to the few students that walk by me out on this chilly Saturday afternoon, and then I snap a group of feral cats, fleet of feet, hard to capture well, and then I amble back to my own car. 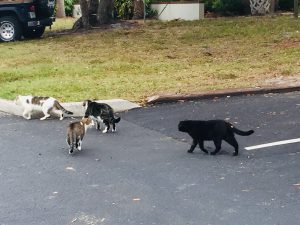 A NPR feature is discussing Rom-Coms. They talk about movies I haven’t seen, like “Maid in Manhattan,” with Jennifer Lopez, but then my ears perk up when I hear dialogue between Meg Ryan and Billy Crystal. I know immediately it’s from “When Harry Met Sally.”

Then there’s an exchange between Meg Ryan and Kevin Kline from “French Kiss,” and a trapdoor opens in my memory and I plunge into a movie theater on a Saturday night with my fiancé, Jim. There’s a reason I don’t remember specifics about this film.

Two women behind us talk through the previews. Often that’s a bad sign. They then proceed to carry on a running dialogue throughout and about the film. Really, they say Meg Ryan’s teeth look like little, white chiclets. They give a blow-by-blow commentary like they are ensconced in some private cocoon, rather than in a crowded theater behind a woman not known for her patience, or ability to screen out talkers and stay focused on the film.

I huffed, I puffed. I eyed alternative seats. There were none. I did the dreaded turn-around and asked them to stop talking.

I fidgeted, shot them dirty looks, and then asked them again to STOP TALKING.

“Go fuck yourself!” one said.

And then things got really weird.

Out of my peripheral vision, I saw that there was a large soda and a straw involved, and then Jim was rushing me out of the theater. We ran once we hit the parking lot, leapt into his Jeep and roared off into the night.

Heart a thumpin’ I asked, “What did you do?”

He spit soda on them. And it wasn’t a mere mouthful but more akin to a sticky, sugary shower. When he confessed, I did remember hearing something between a gasp and a “What the fuuucckkk” from the ladies.

Jim’s behavior worried me, settled into my stomach in a little knot. Embarrassed, I told this story to a few friends and family. I told myself that these inconsiderate ladies did deserve something, but still this was a pretty anti-social response, surely, we could have handled it better. And little did I know then that in a few decades, random acts of violence wouldn’t be so random, and nowhere would feel safe.

But no one I spoke to felt like I ought to call off our engagement. He was sticking up for me they point out, which was kind of sweet. Still… What else is this seemingly mild-mannered man capable of?

We married anyway (on a rainy morning during Hurricane Fran) and more than two decades later, there have been no repeat soda-spitting performances—or any other questionable responses to rude people (that I know of).

And, later on another Saturday, twenty-four years later, after the museum visit and the walk around FIT, when the rains struck hard and strong, surrounded by our three non-feral cats, one on Jim’s lap, one on mine, and one on the coffee table next to me lounging on the TV controls, Jim swigging from his bottle of sparkling water which he swallowed and did not spit, we watched a movie together without incident.

Reader’s Invitation: Please share. Got any anecdotes of behaviors that made you think twice? I’ll usually respond to your comments within 24 hours.

2 thoughts on “Art at FIT, French Kiss, and The Final Straw”