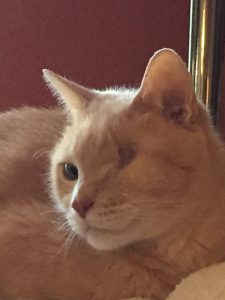 Okay, so my original idea for this final blog post of the year was to write about a couple of really stupid things that I did this year. But then Cody, our oldest, one-eyed cat (his cancerous left eye enucleated in August) barfed. So what you may ask? Don’t cats barf all the time? Well, yes, at least ours do, well, really just one of them, Catsby, but since his surgery in August, Cody has been barfing and losing weight too.

When you live in a household of cats that throw up, and you actually have a life, for example, Jim works full time, which allows me to do lots of other stuff, a teensy bit for $, and a lot for other types of reasons, which is a long-winded way of saying that we are often either not on the premises with the cats at the time of the “incidents,” or we aren’t paying attention. It can be difficult to know who is doing what when.

So I don’t spend the whole post boring you with too-graphic, yucky stories of the digestive issues, I’ll cut to the facts: Cody threw up copious amounts three days in a row (each time while I was sitting at the dining room table eating, which can really put you off your food). I basically freaked after #3 and called our vet at 5:50 pm, 10 minutes before closing. The assistant put Dr. B. on the line, who suggested strongly that I not wait until their first opening four days hence, and instead drop him off at 9:00 a.m. this morning, and leave him for evaluation/tests/exam, etc., and pick up him up by close of business.

So, that’s what I did after everyone in the household except for me slept through the night. I probably slept some, but what I remember is peeing twice and waking myself up with worst case scenarios ricocheting around in my brain that went something like this: the cancer has spread, he has some type of intestinal blockage, or he has an allergy to the one kind of wet food that we finally found that he likes (allowing us to make a sizable donation of all the other types and brands he literally turned his nose up at to the local no-kill cat facility), or something else is terribly wrong with this cat and he is going to die.

And, he will do the latter. Die, that is. I was just hoping it wasn’t going to be soon and not in what in many ways has been one-crap-ass year.

And writing this, I realize after just listening to a webinar sponsored by the Florida Literacy Coalition on “Getting it Write–Helping Our English Learners Edit and Revise Their Written Work,” that I haven’t given you compelling reasons why I am beside myself with worry today while Cody is at the vet, likely freaking out too, while I vacillate between craving a nap and jolting my system into hyperdrive. Why is it that after all that stuff I’ve learned over decades now, which boils down to faith in some power that ain’t me, that it’s STILL so hard to practice that (surrender?) when I need it the most?

For animal lovers, and especially cat lovers, I know you know the bond. I have a hard time not judging someone as clearly deficient if they are immune to the charms of a cat in a lap purring away. Cody does that and more. He does this shift, hitches his cute, little cat body to one side, raises his head and looks at the owner of said lap with adoration. He’s been doing this for more than 13 years with two eyes, and now just his one. Cody has logged many days lying at my feet over the last two and a half years as I got serious (and motivated) about putting a book together about one woman’s extraordinary ordinary life. At times, he’d stretch, arch his back towards the ceiling, and then stand on his hind legs, and tap at me with an outstretched paw. It was probably an invitation to stop and feed him. I ignored that request, but did pause in my typing to scritch his head. Often that was enough for him to lie back down in a ray of sun slanting through the window in the late afternoon and wait for dinnertime. 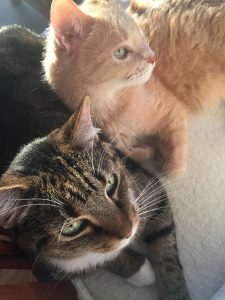 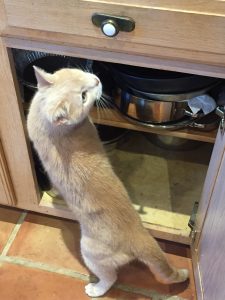 Mostly, we just love him for being uniquely Cody: a lovely tawny tan, with unbounded curiosity to help open every package that enters the house (and there’s a lot of them) and explore any open cabinet, a destroyer of paper products, which requires us to hide toilet paper, paper towels and Kleenex, and a cat who likes his bro, Cayce, but not Catsby, and a cat that has the loudest, rumbling purr of all the cats I’ve ever had (and that’s a lot!) We love him, we just do.

Today I envy my husband’s personality, he refuses to get all neurotic about the cat. He sleeps soundly, exercises hard in the brisk cool of the morning while the dew sounds like rain dripping off the trees, goes to work like it’s just another day, and is ready and willing to deal with whatever comes our way. I, on the other hand, am cramped and curt with him for being like he is, which begs the question: Do I really want him to join me in my neurotic angst?

I felt a little bit weird about it, but I put Cody on the prayer list at Unity on Sunday along with humans I am worried about too. I’ve been back to Unity for a couple of years now, and they’re big on Denials and Affirmations, those Fillmore founders knew what they were doing, and I’ve been practicing them in the middle of the night when I wake with a start, mostly in fear, about this Administration shredding our democracy, but sometimes, like now, about Cody. Here’s one version: “I give no power to my fear and anxiety about Cody. I trust in my Christ consciousness that knows what is in Cody’s highest good.” It can’t hurt. And it helps some, it does.

And it helps too to be able to write and know that someone will read this and relate and may even offer a comment or two that will help me feel that I am not alone in my worry about Cody. 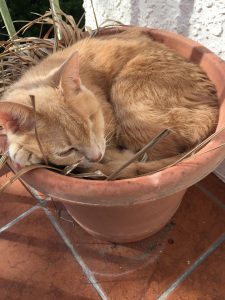 And, of course, I know that the precarious health of one senior cat in Cocoa Beach, Florida, does not amount to a hill of beans, or compare to the suffering from an outbreak of Ebola in the Congo or the starvation of children in Yemen, and the jazillion of incidents of awfulness in the world. And for those of you who know me, you’ll probably agree that I will never be known for an outstanding ability of proportionality. Right now, a slightly-under-nine-pound cat, feels like my whole world.

Reader’s Invitation: I’ll likely revisit Stupid Things Beth Did in the New Year. In the meantime, as always, I appreciate you reading my blog. Your comments make my day! Happy Holidays!