Note to Readers: Spoiler alert. You may want to skip the last paragraph if you are going to read American Wolf: A True Story of Survival and Obsession in the West.

I don’t know exactly when it will happen, but I do know from past experience losing loved ones that this sharp, acute, spiky grief will leave at some point. For now, I am in that stage where I still count the days since this and that happened: three weeks ago my aunt died, two-and-a-half weeks ago we were at her funeral, two weeks at this time our flight back to Florida was delayed….

A friend in North Carolina texts me regularly to see how I am. I say some version of, “I am sad. And I am glad my aunt is no longer suffering. This is a big loss for our family.” And it is. The matriarch at the center of our family is gone. 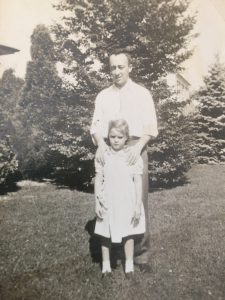 I’m not sure my Aunt Celie ever really wanted that position, but from an early age she had great presence and confidence—or at least that’s what she projected to this niece.  In the photo, circa 1949-50, she is 6 or 7, standing with my father. Where did that self-possession come from? It may have come from her own early loss when her father died when she was just nine years old. My grandfather’s death at 49 was certainly a shock to my own mother, who was nineteen years her sister’s senior, married and living about an hour away in a suburb of Baltimore with her husband, a young engineer at Bendix, and their toddler son, my older brother, Bill. The shock of her father’s death while maybe not the factor in my mother’s miscarriage, was certainly a factor and she lost that baby.

Aunt Celie was forced by circumstances to grow up fast. Family lore goes that my grandmother had never even written a check, although, she was a most resilient woman, who took boarders into the large, commodious colonial my grandfather built on a picturesque street in Frederick, Maryland, a block away from Culler Lake, where I spent many a happy afternoon tossing bread crumbs to the ducks. 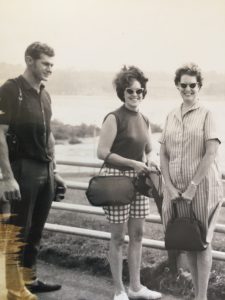 My aunt was one, smart cookie as my father described her, attractive and athletic and confident. After a brief early marriage, she married for a second time, and it was by all accounts a long, happy union (see photo with Uncle Charlie on the left and my mother on the right, at Niagara Falls).

I remember when she was pregnant with the first of her two children. I was 16 and recall my mother talking on the phone with her sister shortly after she gave birth to Betsy; my aunt was ravenous, chowing down on a hamburger.

My aunt was always central in my life, partly because she and my uncle lived with my grandmother in that house that my grandfather built, and it was the hub for all our family visits. Our little Lambdin offshoot did not vacation to the ocean or anywhere, really. When my father took occasional time off from his busy jobs, he drove his family 8 hours to Frederick, MD, where we stayed with and visited other relatives from the home base of 205 Lindbergh Avenue.

That home was a natural extension of a home away from home for me when I went to college a couple of blocks down the street. And for a while, they had a pool table in the basement, giving my friends and me yet another reason to drop by. We were always welcome, no matter how busy my aunt was, first with Betsy and then with two young children after Jimmy was born. I never remember calling in advance and yet we were always warmly greeted. My aunt was never too busy or too distracted to drop whatever she was doing to spend time with me. What a gift for me and my friends!

I feel fortunate that I had such an influential aunt in my life. After college, I never visited in the same kind of on-going way, but when I did or when we spoke, the intervening years easily evaporated like fog in sunshine, easily tumbling into an easy rapport. I’ve since learned that those kind of relationships are not common and are something to treasure.

Aunt Celie was the first person I called from the nursing home after my mother took her last breath. Losing a parent, no matter how complicated the relationship (and mine was with my mother) is hard and it helped me tremendously to have my aunt on the other end of the phone expressing concern and sorrow. She knew our history and loved us both. Then a few years later, her other sister died, leaving her the remaining elder female in the family.

It’s hard for me to really take in and accept that she won’t be here for me to call when my father dies—and while I don’t expect he’ll shuffle off this mortal coil anytime soon, he is 93. Tick tock, tick tock.

My aunt’s death, twenty-one days ago, on October 9, has been supremely disorienting. I still know up and down and my right from my left, but there’s an internal something that’s just off—my heart has been severely dinged, if not torn asunder. It literally aches.

A part of me can see myself going through the early stages of grief, especially shock and anger, and I know that they are not linear and I’ll cycle back into them at random times as I move into the next stage. It’s easier at times to be mad rather than sad, and I am unduly sharp with Jim over stupid stuff—like his asking me three times when Dr. Who is on, a show I don’t even watch.

The day before Aunt Celie died, I picked up a book I’d had on reserve at the Cocoa Beach Library. It was American Wolf: A True Story of Survival and Obsession in the West by Nate Blakeslee, and the PBS Newshour Selection for October. For the trip to Maryland for my aunt’s funeral, I didn’t take that book and instead packed Bill Bryson’s, In a Sunburned Country, knowing on some level that what I needed in the hotel room over those nights was not a heavy read, but something lighter, maybe even comic relief. Bryson did not disappoint (he and David Sedaris being my go-to, laugh-out-loud authors).

But when we got back home, I picked up American Wolf, and started the compelling tale of just what’s been going on with the wolves since they were reintroduced to Yellowstone in 1995. The author focuses on a few wolves in particular to create a through line in an-oft contentious story of competing interests among hunters, the wolves, the feds, local and state governments and agencies, and the public, including dedicated wolf watchers.

As I read on, I felt more and more dread, which results in less and less sleep and more and more dog-eared pages that I read to Jim the next evening after work. I know it is going to be hard to read out loud these pages that get to me the most, but still I feel compelled to do it. When reading to him, I have to stop several times to let the sobs subside before continuing: an alpha female is shot and killed legally by a hunter wanting another trophy. But, this is no random wolf, which would still be sad to a large swath of readers, but is a beloved favorite of the Yellowstone community, and one described through various stories in the book as empathetic, wise, merciful, smart, and resourceful. When this alpha female is killed, her partner remains by her side, silent at first, and then he howls. He is soon joined by others of the pack, their voices echoing throughout the landscape. They are inconsolable. I feel the same way.

Reader’s Invitation: I always love to hear from you. Please share whatever strikes you from this piece. I generally respond to comments within 24 hours.