The Sea Turtles of Cocoa Beach and God Speed, Guacamole

I live in a cool place. Well, not temperature-wise cool, God knows, (as I write this in the early a.m., it’s already a steamy 83 degrees), but cool, meaning residing in one of the premier places in the country that blasts rockets into space. Have to say that watching a launch never, ever gets old. But, yesterday, instead of gazing skyward, I was focusing on the land and the sea. And, it was for a happy event!

An adult green sea turtle washed up on a local beach in late February, emaciated at 199 pounds, and grievously wounded by a predator, probably a shark. The turtle was transported to our local zoo and admitted to the Sea Turtle Healing Center on-site. The turtle’s story would be pieced together over time, including its sex. Originally identified as a he, the turtle turned out to be a she. What wasn’t in dispute from the get-go were her very serious, life-threatening wounds: a mostly missing right front flipper, a deeply lacerated left front flipper, chunks chomped out of her head, neck and carapace, and a nasty parasite infestation. 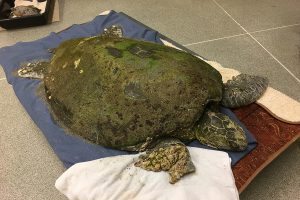 Her caregivers discovered a flipper tag from a tagging program in Playa del Carmen, and a volunteer noticing the Mexico connection and observing that the turtle looked like a lump of guacamole, called her just that. The name stuck. Guacamole it was.

Over the next seven months, her caregivers treated her with medications and honey and tube-fed her “delicious gruel” as she healed. Success was not guaranteed, there were setbacks. The turtle would not eat on her own for a while. But she made slow but steady progress, noted by posts that said things like, “pooping regularly,” a cause for celebration because it showed her GI tract functioning.

The community was rooting for her. A local business, Boaters Exchange, teaming up with Ocean Fabrics, created a custom waterproof pad for her treatments on the tank platform to prevent damage to her shrunken and soft bottom shell.

There was much cheering in the land when Guac started eating small amounts of algae on her own and swimming around her tank. By early May, she was off tube feeding, had added squid to her diet and her flippers were healing well. By the end of July, she was up to 250 pounds and a volunteer made her a special extra-large PVC enrichment attachment for her tank so she could rub her shell on it like she would do in the wild. By the end of August, she was up to 263.4 pounds and by the end of September, she was set for release after a final fecal sample showed she was parasite-free.

A little frisson of excitement puts an added spring in my step as I walk through the park’s parking lot and see this notice. 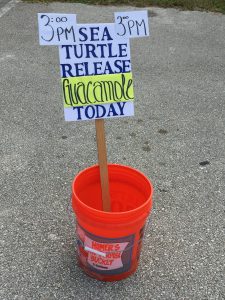 A crowd, which ultimately grows to about 200 cheering spectators, is slowly assembling. I walk by a Brevard Zoo tent and hear a woman shouting instructions to the volunteers gathered. A large section of the beach near the lifeguard station is cordoned off with ropes. It is about an hour until release time at 3:00 p.m., but already viewers are staking out prime-viewing territory at the water’s edge.

After satisfying myself that I’ll be able to slip in to a good viewing post closer to the actual release time, I go spear trash until around 2:50 when I return to stand in the not-so-gently lapping waves, and wait for the Ocean Rescue ATV to bring the star attraction. I chat with tourists from Missouri on my right and New Jersey on my left.

They say, “We had no idea this was going on. We just lucked out being here today.”

Then a Sea Turtle Preservation Society guy barks at us, “Get out of the water. It’s dangerous for the turtle!”

A groan ripples through the crowd. I start to protest on behalf of the people who have deliberately shown up early to claim their positions. He throws up a hand and says, “I am not going to argue with you. Talk to Governor Scott and the Wildlife Commission about it. If you don’t comply, we’ll close the releases to the public.”

Wow! That escalated quickly. I have absolutely no problem with that rule, but come on, tell people during the previous hour when they were assembling that they have to be behind a certain line—and then mark the friggin’ line!

Muttering under my breath (and thinking that there’s a lot I’d like to say to Governor Scott), I move up the beach and squish in next to an amiable couple. I can see that any pictures I take are unlikely to be very good, I am just too far away. Then I notice a little girl, about ten or so, behind me and know she probably can’t see very well. I carry on an internal debate about whether to cede my position. I really don’t want to give up my place, but she’s an excited kid, and I turn around and motion for her to come in front of me. She does.

And then the energy shifts and all heads pivot to the ATV transporting precious cargo. Guac is on the beach! Four rescuers/healers lift her out, set her down on the sand, lift her up again, awkward-walk a few yards with Guac, flippers flailing, and set her down in the surf. 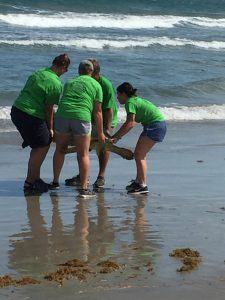 The crowd collectively holds its breath as waves knock Guacamole sideways in the incoming tide. Oh no, she’s not going out! Now I see why the guy wanted us out of the water. But then, she gets the hang of it, whatever it is (instinct?) and she re-aligns her now nearly 280-pound turtle body and heads out to sea. The crowd hoots and claps. God speed, Guacamole!

Reader’s Invitation: I would love to hear any comments you have about this post. Got any of your own good news stories to share? I will generally respond to your comments within 24 hours. Please make sure and let me know if your comments are not for public consumption and I will respect your wishes. Thanks!

2 thoughts on “The Sea Turtles of Cocoa Beach and God Speed, Guacamole”