Somebody to Lean On – Laura, Lila, Jim and the Old Woman in Cocoa Beach

Jim arrives home from work. I hear music blasting from his car radio out in the driveway before he turns the car off and enters the house. In the bedroom, he changes out of his work jeans and polo shirt into shorts and another polo shirt, one that is way too big for him now that he’s losing weight, but one I know is super comfy.  Pillow propped under my head, I lie on the bed and wait for him. He lies down next to me and seconds later Catsby appears out of nowhere and leaps on to Jim’s chest to give him a head butt before flopping down between us. Catsby snuggles his little cat body smack up against Jim. I suspect he finds his soft animal body comforting. I know I do.

We go over the day, a well-worn routine for us. I start, “How was your day, honey?”

Verbosity only runs on one side of our little family. I have the talent (is it a talent?) where I can make a mountain out of any mole hill, craft a damn near whole story from just about anything, no matter how inconsequential. But, tonight instead of relaying my day’s highlights, I’ve brought in the front section of The New York Times, with a bunch of blue-pen marks on it, highlighting passages that have particularly moved me, and that I want to share with Jim.

It’s been a couple of weeks of big losses: Aretha Franklin, John McCain and Neil Simon. Most of the inky highlights are dedicated to the life of John McCain: his singularly unimpressive academic performance graduating fifth from the bottom of his class at the Naval Academy, his cinema-worthy war experiences, “a man of honor chastened by a brush with shame,” as one of the Keating Five, but I’ve also singled out a short piece in Metropolitan Diary, New York City snippets that always run on Monday. I don’t usually read them aloud to Jim (he can read and does read the paper on his own just fine without my editorializing), but this one particularly touches me (I’d marked it with an arrow and a heart), and something inside me says, Share this one with him.

Somebody to Lean On 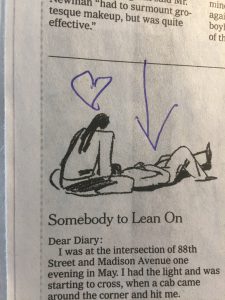 I was at the intersection of 88th Street and Madison Avenue one evening in May. I had the light and was starting to cross, when a cab came around the corner and hit me.

I was lying in the street, in significant pain and unable to get up. Everyone in the small crowd gathered around me appeared to be calling 911.

The ambulance took longer than expected to arrive. While I waited, a woman crouched down near me.

“I’d like to sit cross-legged behind you and have you put your head on my lap,” she said quietly.

And then she did just that. I rested on her lap until the ambulance finally got there. I asked her name.

Laura, I’ve thought of you so many times since that night. Know that my displaced, fractured hip was more tolerable because of your kindness, and I’ll never forget it. Lila Bader

I start to cry when I get to the “Laura,” in the vignette and stop reading for a minute to compose myself to finish. Jim says, “Very touching,” and squeezes my hand. I say that I would have been a bit worried about moving the woman’s neck, but we agree it was an exceedingly nice thing for Laura to have done for Lila, to be someone she could lean on while lying hurt in the middle of the street.

Jim walks upstairs, just back from an early morning bike ride before work, clothes and body soaked with sweat. He stops to talk to me, which is out of the norm for Jim, usually he’s in a rush to shower and dress for work. He tells me that just a little while ago, a few blocks away from home, he saw a woman hunched over on the sidewalk, a woman he describes as maybe in her 70s, maybe in her 80s, fit, in shorts and running shoes. He rides by her, thinking at first she’s bent over in some yoga pose, but something inside of him tells him to go back. He does and asks, “Are you alright?”

She looks up at him and he sees that she has road rash on her face, a gash on her nose, bloody knees and palms, and says, “I don’t know.”

He gets off his bike and walks closer. “Can you get up?”

He says, “I’m awfully sweaty but would like to help you stand up.”

She says, “I don’t care about the sweat.”

So, my sweaty-handed husband gently helps the older lady to standing, getting behind her he tells me and lifting her under her armpits.

“You are going to be sore tomorrow, he says. “What happened?”

“I don’t know. I’ve never fallen like that before,” she says.

They stand together for a few minutes and then Jim says, “I’d like to walk you home.”

She says, “No, that’s okay, I live right there,” and points to condos across the street. Jim waits to see her take a few steps, to make sure she is steady on her own two feet before he hops on his bike and rides away.

Here’s what I wonder: would he have gone back to help this lady if he hadn’t heard “Somebody to Lean On,” the night before? Did that story act as some kind of pump-primer calling upon him to stop and assist a stranger who needed help? Who knows? I’m not sure what I would have done. I like to think I too would have stopped but who knows. I do know that I’ll continue to be on the look-out for these random acts of comfort, in print and especially in real life.

Reader’s Invitation: I’d love to hear any of your own random acts of comfort as giver or receiver or anything else that strikes you from this piece. I always appreciate your comments. I usually respond within 24 hours. Make sure and tell me in your post if you want to remain anonymous.

5 thoughts on “Somebody to Lean On – Laura, Lila, Jim and the Old Woman in Cocoa Beach”