American Airlines flight #1593 touches down on the short runway of National Airport and comes to an abrupt stop. I snap this image of the Washington Monument from the window while we wait to deplane. It’s a lousy photo but it does its job – it anchors me in familiar territory. 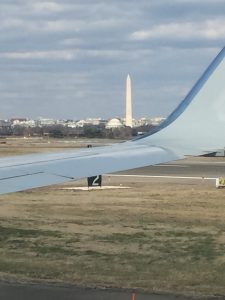 But the primary purpose of this trip is not to tramp the familiar streets of D.C. or see old friends or explore the many delights of the city, but to visit my aunt, long my favorite aunt, who faces significant health issues (details which are hers to share – or not).

Shortly after getting the news about my aunt far, far away in Florida, I feel a pull to visit her and here I am, just an hour away. Soon I will brave the madness of Metro D.C. traffic and navigate the rental car up the George Washington Parkway to 495 to 270 to 40 to 15 to the Rosemont Avenue exit in Frederick. After a few miles and some deep breaths, I relax enough to ease the death grip on the steering wheel to fiddle with the side mirrors and the radio. Finding nothing to my liking, I turn it off, which leaves me alone with my thoughts – an oft dangerous territory to wander alone in. However, the heavy traffic never really abates continuing to whiz by me on the left and the right, so my focus needs to stay razor-sharp.

I pull up to the curb outside my aunt’s house. I am going for a smooth glide in, but instead misjudge the distance and hit the curb with a jolt. No damage done, however, and my aunt greets me at the kitchen door. Right after I step over the threshold into her house, into that familiar kitchen where I spent umpteen number of hours sitting at the table yakking with her and my grandmother during my four years of college down the street, she offers me vegetable soup, homemade, of course. I decline but the offer has done its job – brought me smack dab into the present moment with my aunt. There is no place I would rather be than in her good company. But, it’s not just about nostalgia, although her influence on me was HUGE (and healing) as a steady feminine presence offsetting a troubled relationship with my mother. She was then and still is a formidable force in her own right – and today she wears a t-shirt that says, “Never underestimate an OLD WOMAN who graduated from FHS, Frederick High School. 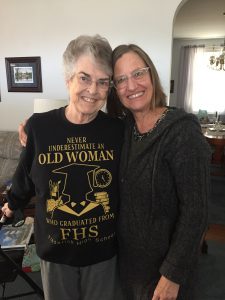 I haven’t seen my aunt since my mother’s memorial celebration, but the intervening years dissolve in an instant. I feel welcome, loved and accepted in her presence. During this visit, I discover that others feel the same way. In a text later that night with her daughter/my cousin, Betsy, I comment on the kindness of their shared housecleaner, a woman named Heidi. Shortly before I leave my aunt’s to return to D.C., Heidi shows up with chicken pot pies for my aunt and uncle’s dinner. “Mom always bring out the best in people,” Betsy writes. I hope somebody says that about me someday.

However lovely the visit, which it is, I am acutely aware that she is mortal – as am I. This mortality thing has been smacking me in the face lately. At my doctor’s insistence, I recently got a mammogram and then a week later got the dreaded letter in the mail that said there were some “abnormalities” and additional procedures were recommended.

Four separate visits later to the doctor’s office, I finally have the necessary orders with the correct procedural codes, and after ponying up the $439.23 deductible over the phone, despite being told by our insurance company it would be $200, and after hurling a fit of pique at the registration lady, “We need to do something in this country to fix our broken healthcare system. Each year we pay more and more for lousier coverage. Please vote democratic,” and then after apologizing for misdirecting my anger towards her, and after she calls the hospital specially to see if she can get me in earlier than what her screen says is available, and after I thank her profusely for her kindness, I am scheduled for my additional procedures. But they are inconclusive and now the radiologist wants to do a biopsy. What he says makes sense and he tells me not to be unduly alarmed but still I wonder if this is overkill. Then when I find out it’s going to cost us $871 (the rest of the deductible and a 20% co-pay) towards the $4000 total cost (yes, $4,000 for a stereotactic biopsy), I really wonder if it’s overkill. Fibrocystic breast disease runs in the family and I do not expect anything to be seriously wrong. Still, it’s hard to not be alarmed and I have to coax my shoulders to drop from up around my ears.

My heart breaks so easily these days, like those fragile bird eggs that fall out of nests and lie cracked on the ground. I suspect it’s a natural function of aging and living a full-out life. But it mends easily too. Little acts of consideration and kindness go a long way. There is such goodness in the world and I see it clearly when I am tuned in to that frequency. And it feels absolutely imperative these days to focus on the good to help bind up the cracked and broken places.

Back in D.C. the next day on my way to the Outliers and American Vanguard Art exhibit at the National Gallery of Art, I glance at my phone and see my aunt has called. I duck into the plaza of the Canadian Embassy to muffle the sounds of busy Pennsylvania Avenue to call her back. 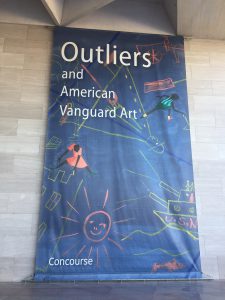 My cousin David has succumbed to the flu, alone in his house in Waynesboro, PA, discovered by Betsy and her husband, Scott, when they drove there after not being able to reach him by phone. I mourn David Winfield VanFossen’s too-early death just shy of his 60th birthday. 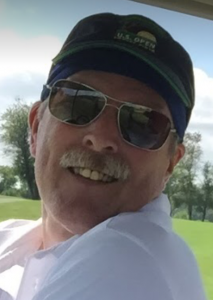 Death is spreading like spilled ink into my generation.

Later that evening, my last in D.C., I swing by the National Portrait Gallery and take my place in the queue to see the Obama portraits. There is a palpable excitement in the crowds waiting to snap selfies with Michelle and Barack. I send Jim a text, “I miss the Obamas.” 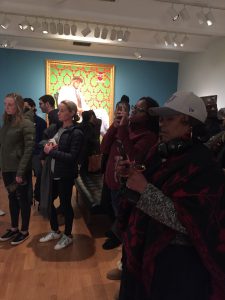 Then on my way to the hotel, I glide up the escalator from the bowels of the Foggy Bottom Metro Station, into the chilly evening, and see a young, dark-haired woman, a girl really, in a heavy coat sitting cross-legged on the sidewalk with two large dogs, one tan, one a mottled gray, curled around her. She holds a sign with a too-common message, “Homeless, Hungry, Need Money.” I bend down to give her a dollar and my heart hurts as she says, “Thanks,” and I take in the scene, the blanket, how calm the dogs are, like this is just another typical evening.

This world will break your heart if you let it. But what choice do we have? Sorrow, anxiety, anger, powerlessness, it’s all part of the deal. And, while I wouldn’t necessarily seek any of those emotions deliberately, they do sharpen my appreciation for little kindnesses and the beauty that is all around.

I am back in Florida now. Our local meteorologist, Mallory Nicholls, reports that we are unseasonably cold. Still it’s in the mid-sixties. Out the porch door against a bright, blue sky, palm fronds bob and weave in a brisk breeze, ducks glide across the pond and an anhinga stands on the bank in its favorite place with its wings spread wide to dry. Behind me, Cayce and Catsby roll and tussle and then settle down in the rays the sun throws across the bed. 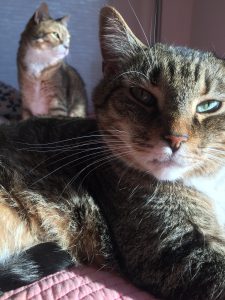 Cody naps atop Jim’s dirty underwear and opens one eye and rumbles with a soft purr when I lay my head on him. For just a moment or two, I let my vibrations sync up with his before I continue with my day. 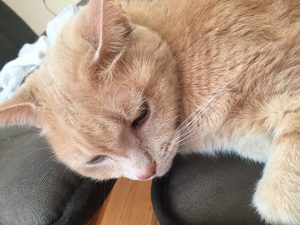 Reader’s Invitation: How do you deal with the sorrows of this world? What are your balms? What random acts of kindness have you received? Given?