Thank You, Thank You Very Much

It is 68 degrees. Not bad for a late January morning. Cayce agrees as he lounges outside on the top floor porch. 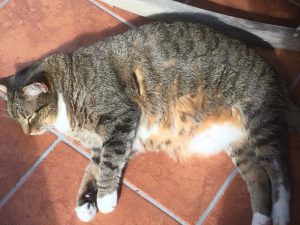 This angle, while hardly his most flattering, sadly does accurately reflect his spreading chubbiness. This cat, however, cares not one whit about his “imperfect” body, but instead enjoys the moment for what it is – an opportunity to bask in the warming rays of a wan sun. I say, “Catch it before it fades, cat boy. Rain is in the forecast.”

I hurry to snap the photo, but try to do it quietly, calmly, so the cat doesn’t move. Mission accomplished, I bend down to stroke  his thick pelt, and a sense of well-being courses through me (and I hope the cat too). Amazing the effect a fat cat lounging on the porch in an anemic sun has on me. Such an ordinary but sublime moment.

Neither he nor his brothers have been outside much lately. Like much of the country, we’ve been unseasonably cold – not bitterly cold like where my father dwells up north in Saratoga Springs, NY, where it was -12 degrees just three mornings ago, but cold enough that I am often the lone walker on the beach, sweatshirt hood up and tightly cinched under my chin, windbreaker zipped against the bracing 25 mph wind coming out of the north. I grind sand with my back teeth until I clamp my mouth shut. As the sand blows down the beach, a recent Letter to the Editor pops into my mind. It was written by a local man complaining about money spent on beach re-nourishment. He objects to spending millions of taxpayer dollars to truck in and dump new sand on eroding beaches. Perhaps he has a point. Is it an exercise in futility?

I sometimes wonder the same about my writing – if it too is an exercise in futility. Sometimes I think I expect too much from it, like a wide adoring audience (just kidding, sort of), but with no progeny to carry on some kind of legacy, my writing takes on an added poignancy. It feels important to leave something tangible behind that captures who I was for this brief time on planet Earth.

People say that writing is a lonely business. That always surprises me. I don’t really feel that. A much-revered teacher once said that I was comfortable in my own skin. What a compliment! Now if only I could stop the preoccupation with my sagging, sun-spotted skin. However, beyond the superficiality of my looks (or lack thereof), it is true that I enjoy my own company — and am endlessly entertained by the places I go when I write.

However, the reality of writing is that very few of us hit it big – most of us do not get tapped by Oprah or NPR or Ira Glass or any publisher, but toil in relative obscurity. Most of us do not attract wide audiences. Does it matter?

About a year and a half ago, Jim and I ambled over to Rollins College to catch Bill Bryson unspooling funny stories about his writing. We went early and joined the masses, nearly 2,600 other lovers of the written word, who sat on chairs with lousy back support and bleachers with no back support in the campus’s sports arena. We chatted with our neighbors, unusually voluble, while waiting for the show to start. Bryson did not disappoint. He was amusing and charming and said that it wasn’t very long ago that he was giving readings to just a handful of people, including once in Scranton, where another guy named Bill Bryson showed up, not because he was interested in his writing but because they shared the same name.

I certainly have harbored the hope (and fantasy) that my blog (and other writing) would be widely read. I expect I am not unique. But, that’s generally not been the case. Sometimes, I feel bad about that – and sometimes I feel bad about feeling bad. Clearly, I am still steeped in our metric-centric culture.

However, here’s something I did recently that made me feel really, really not bad, and in fact just great. I went back over last year’s blog posts and re-read every single comment written in response to those 2017 pieces.

In doing that I discovered a couple of things: that the stories about natural disasters, sea creatures and dead mothers garnered the most responses, and that stories about Trump, films and books the least. But, what was most striking was what happened inside of me when I read your comments: a rich assortment of thoughtful, spontaneous, heartfelt, empathetic, short, long, beautifully written, deeply supportive and generous comments. Warmth infused my very soul. Like Cayce lolling in the warm sun, I basked in the radiance of your goodwill. In the privacy of my office, I cranked up YouTube and did what passes for dancing for me, to a sure toe-tapper, Walking on Sunshine https://www.youtube.com/watch?v=iPUmE-tne5U.

And I would be remiss if I didn’t single out one guy for special thanks, although he’s the last guy who wants to be singled out. I guarantee that Jim will groan when he reads this, and probably say, “Oh no!” Such is the lot of a writer’s spouse. Simply put, Jim is a world-class listener and an invaluable help as drafts evolve into finished products. His advice is unfailingly sound, and sometimes I even follow it. And without his technical know-how, I’d be up the proverbial shit’s creek without a paddle.

He and you make all the difference in this writer’s life. Thank you, thank you very much.*  https://www.youtube.com/watch?v=SxXdE7pBTjQ

*Elvis would have turned 83 on the 8th and shares a birthday with Leslie, a friend since kindergarten, where we sat next to each other in Mrs. Leslie’s class.

Got any stories or “aha” moments when you realized just what was valuable or rewarding? Please share about that or anything else this post evokes in you.

12 thoughts on “Thank You, Thank You Very Much”