2017 was a tough year. But through it all (hurricanes, a leaky house, sick cats, a mad king in the White House, etc.), there was one source of great and sustaining pleasure. Books! And I am so grateful to the authors who threw me a lifeline every, single evening. I lurched after it, grabbed on to it, and clung to it like a monkey as their stories, powerfully told, lifted me up and away into a world beyond my own — which paradoxically helped me cope better with the chaos down below.

Like many of you, I have my reading routines. Mostly, I read late at night after Jim has gone to bed. Teeth brushed, breath minty, he falls onto the bed elevenish with a short, involuntary groan of pleasure. This is a guy who likes to be prone. Within minutes, his muscles relax and start to twitch. Catsby jumps up near him and kneads the covers, or if feeling particularly frisky, chases his tail like a madman possessed. While Jim pushes out soft snores through pursed lips, Catsby eventually gives up the tail chase and flops against him in the same curvy configuration that Jim’s body has assumed. My heart swells with love looking at them. I turn and pull the blind aside to marvel at the stars and the moon throwing down light on the yard below, pet him until he purrs (Catsby, not Jim), and then tiptoe out of the room and upstairs to go do what I love – read in the still of the night.

I read until midnight or 1 or even 1:30 if the book is especially compelling. In 1988, I read The Silence of the Lambs by Thomas Harris in one sitting. Clarice Starling and Hannibal Lecter – what worthy adversaries! And Buffalo Bill scared sleep right out of me. But that all-through-the-night reading was for a younger Beth.

I set no volume records in 2017 and finished a respectable but not earth-shattering thirty-six books. They were mostly non-fiction (32), with just 4 works of fiction (novels by Tom Perrotta and Elizabeth Strout, a collection of short stories by Ann Beattie and a mystery by Michael Connelly).

While humor was less a dominant theme, it was most welcome and five books made me laugh out loud: The Lost Continent, Travels in Small-Town America by Bill Bryson, although I felt he was too snarky about fat people, especially fat women, and two by one of my all-time favorite authors, Anne Lamott. Somehow, I missed Operating Instructions, A Journal of my Son’s First Year, out in 1991, but haven’t missed any since, including her latest, Hallelujah Anyway, Rediscovering Mercy. The always amusing Sarah Vowell made history lively in Lafayette in the Somewhat United States. And, I capped off the year with David Sedaris’s, Theft by Finding, an edited version of his diary entries from 1977-2002. National treasures, these four. Blessed are the humorists.

I read about an ancient, “vanished” civilization in Honduras in The Lost City of the Monkey God by Douglas Preston, a short but powerful book to fuel the Resistance by Yale Prof Timothy Snyder, On Tyranny, and the galling but essential Devils’ Bargain, Steve Bannon, Donald Trump and the Storming of the Presidency by Joshua Green. Like Buffalo Bill, Steve Bannon kept me up all night – with a similar anxiety gnawing at my innards. Clarice, where are you?

I avidly read several books with spiritual themes and would have inhaled them whole if I could have: four by Franciscan friar, Richard Rohr, What the Mystics Know, Seven Pathways to your Deeper Self; Falling Upward, A Spirituality for the Two Halves of Life; The Naked Now, Learning to See as the Mystics See; and Eager to Love, The Alternative Way of Francis of Assisi, as well as Power Through Constructive Thinking by Emmett Fox, and the two by Lamott, previously mentioned.

I wonder how many of you start books and don’t finish them. My rule of thumb is to give a book at least 50 pages before abandoning it. In 2017, I didn’t finish two I started: Lincoln in the Bardo by George Saunders, a shocker given its sterling reviews and subject matter (death and sorrow, kind of my thing), and my great affection for George Saunders’s essays including The Braindead Megaphone and his college commencement address, Congratulations by the Way: Some Thoughts on Kindness. I found the Bardo confusing with too many voices to track late at night with fatigue hovering nearby. I also gave up on The Essential Ken Wilber, An Introductory Reader, despite a sterling recommendation by Richard Rohr; too much of an intellectual slog. I suspect, however, that the fault lies with this reader. We all know that personal taste is a curious thing.

Back in the early aughts when we lived on Capitol Hill in D.C., I was in a lively neighborhood children’s book group. Just how did I miss Madeline L’Engle’s A Wrinkle in Time, growing up? That group gave me an added appreciation for books pitched to kids, and although I short-changed this genre in 2017, I enjoyed the one I read: Chelsea Clinton’s, She Persisted. I snatched it off the library shelf just when I needed to mainline a dose of strong women facing down seemingly insurmountable odds.

Like the teacher I was (and still am?), I assign a letter grade to the books I read and record them in my Reading Record on the computer. This year, the grades broke down like this:

As you can see, there are no slackers here. Yes, of course, this “system” is extremely subjective. To make the top tier, it really boiled down to this: with all due respect to the intellect, the books had to hit me emotionally. So, how do I know when that happens? Sometimes, I just know it, I feel it in my body – it’s like being jolted with a low-grade shock, like how I felt reading Heather Ann Thompson’s book about Attica, sometimes it’s a gentler kind of fugue state that descends over me and hangs around for a few days (that’d also be the book about Attica), sometimes I cry when sharing a favorite part with Jim (usually that’s a Lamott), and sometimes I can hardly read the passage out loud to him because I’m laughing so hard (thank you, David Sedaris). Those are the signs that I’ve been touched – to somewhere deeper and truer and maybe even eternal.

My six favorites, my A+s, for the year of 2017 are: What the Mystics Know, Seven Pathways to Your Deeper Self by Richard Rohr, Born to Run by Bruce Springsteen, Hallelujah Anyway, Rediscovering Mercy and Operating Instructions, A Journal of My Son’s First Year by Anne Lamott, the David Sedaris Diaries, and finally, but not least, Blood in the Water, The Attica Uprising of 1971 and Its Legacy by Heather Ann Thompson. 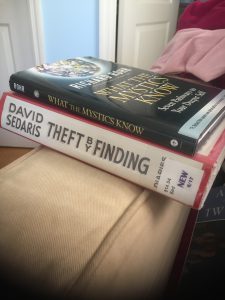 Although one of our greatest songwriters, somehow, I was surprised that the Boss was such a good storyteller. His struggles with depression and attempts to make meaning of that and life in general just made him all the more endearing. Richard Rohr reminds me of my own and others’ oft-confounding humanness, helps me dig deeper to tap wells of compassion and kindness, and helps me accept the perfect imperfection in all of life. I just flat-out adore Anne Lamott and her unique blend of humor and spirituality. And, Heather Ann Thompson is the historian I maybe coulda been had I strolled down one of those paths not taken and actually used my History undergraduate degree in a professional capacity. She has crafted a masterpiece, a tough-to-read, detailed, sometimes academic tome, that through the prism of the Attica uprising lays bare the failings of the government (local, state and national), our inhumanity to our fellows that made me weep and have to stop reading for a week of recovery, as well as our amazing persistence, resilience and fight for justice in the face of long, long, long odds. She helped me see that you have to settle in for the long haul and expect lots of setbacks, when it comes to taking on and shifting entrenched bureaucracies, good ole boy networks, and achieving restorative justice.

All of these authors opened my eyes to worlds beyond my own. They engaged and enraged, provided comfort and joy, comic relief — and often cracked my heart wide open. I take great comfort in knowing that no matter what comes next year, ill winds or sweet breezes, there will always be books.

Reader’s Invitation: What were some of your favorite books of 2017? What touched you? Anything keep you up at night? Please write a line or two about why you chose that book(s).

Please note: You can expect to see your comments and a response within 24 hours.