A Sunday Evening with Dad in Saratoga Springs: A Chance for This Apple to Fall Farther from the Tree

At about 4:45 p.m. on the Sunday before Thanksgiving, Dad and I start the trek from his second-floor apartment to Georgia’s, the restaurant in his retirement complex, on the first floor. It is no small feat, given his age (92), his mobility (limited) and energy level (variable). He scrapes the apartment door with his walker before the door slams shut, leaving Sparky, the cat, hunched over his food, on the inside with Brother Bill and Jim. 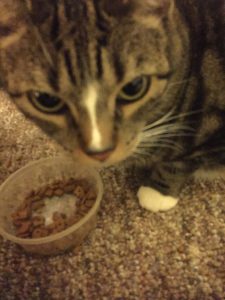 The elevator pings and we climb aboard. As we stand there waiting for the doors to inch closer together ever so slowly, we read aloud the flyers on the elevator wall advertising movie nights: Rocky, The Deer Hunter, A Monster Calls, a social with donuts and cider, and the Wesley residents’ November birthdays.

Once a month, Dad participates in two different book gatherings, including the one tonight, The Consciousness Raising Book Group. It meets at 6:00, and at 5:00, he routinely treats the leader, Reverend Joanne, a minister of Religious Science, and her close friend, Carolyn, another Wesley resident, to dinner.

Dad likes to be early and so we are – it takes us five minutes to get there, not the fifteen he insisted on leaving to overly compensate for all possible contingencies maneuvering through the empty hallways. Outside the restaurant, he half sits, half falls into a chair near the walker line-up to wait for our guests. 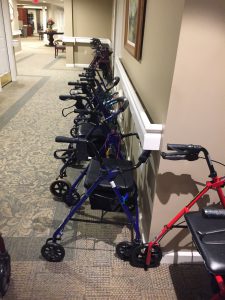 Carolyn and the good Rev show up right on time and we tread single-file behind Dad to a table in the corner.

Generally, an hour for dinner is plenty. But, tonight service is slow, even by Wesley standards, and at 5:40 we are still waiting for our entrées, fish for three of us and something called Dutch beef for Carolyn. Dad is fretting and has said several times, “We’ll have to get take-out containers since we won’t have time to finish eating before book group.”

I stifle exasperation and saying, “Dad, chill, Reverend Joanne has this.” But, I see I really don’t have to say anything. Reverend Joanne does have this. Their considerate comments and questions clearly show they like and respect Dad. His fretting doesn’t trigger anyone but me.

I hope that in the final analysis, people will comment on the good that I tried to do and not my oft-pervasive-miasma of fret and anxiousness, but truthfully the apple doesn’t fall far from the tree, although come to think of it neither of my sibs overcompensate with time like the way Dad and I do. Bill is freakishly punctual, almost to the dot; he is reliable and steady. Tom not so much. After years of waiting, we can count on Tom to be late, and he rarely disabuses us of that notion. In fact, tonight he is supposed to show up at 7:15 after book group for a visit. However, Jim, with the detachment of an in-law, has already asked, “Who wants to wager when Tom is going to show up?”

It’s so easy to see the fault in others, isn’t it? Like the high-fret and lack of proportionality my father is demonstrating right now. I can feel his anxiety – and have to consciously decide not to let it sink its claws in me.

Then I see the waiter heading towards us with our food. Hooray! He sets down the plates of food, covered with clear domes of plastic to trap the heat near Carolyn, and then distributes them. I dig into my rice, overcooked halibut, and mushy brussels sprouts. I note (silently) for at least the tenth time, that this kitchen overcooks the food. I mention this to Jim later and he says, “I wonder if they do that to make it easier for the residents to chew.” I wonder too – one of life’s little mysteries.

As it turns out, fifteen minutes is long enough for three of us to finish our meal. Dad, a notoriously slow eater, packs up the 2/3 he hasn’t consumed into the plastic Tupperware container he has brought down in the compartment in his walker. I dash into the restroom for a quick pee and floss and am distressed to see that I have lettuce in my front teeth, which means that through the whole dinner-waiting conversation, I was speaking with green teeth. I wish someone had said something. But, not a big deal. I carry floss in my bra, extract a thread, and quickly remedy the situation. 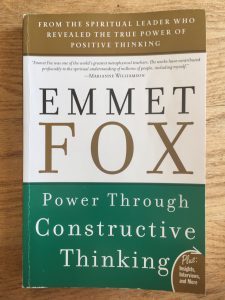 Reverend Joanne hands out a list of questions with specific quotes, pages and paragraph numbers cited, and it is easy to follow along – even for me, who hasn’t finished the book. It’s not for lack of effort but I misjudged how quickly it would go. This is not a speedy read. It was written in 1932, with kind of old timey language and quotes the Bible liberally, which for me has never been an easy read.

Fox discusses the Bible, but from a more relatable and palatable metaphysical perspective. He says this in his Introduction, “The teaching in this book is founded on the Bible. The Bible is not like any other book; it is a spiritual vortex through which spiritual power pours from heaven to earth, and the reason why most people derive comparatively little profit from its study is that they lack the spiritual key.” He goes on to say, “You can have power to make your life healthy, happy, useful, and outstandingly successful, if you will study the laws of life, and apply them faithfully.” I especially like the spiritual vortex part. That makes sense to me.

A robust discussion follows about re-aligning our thinking, the power of regular prayer and meditation to lift our consciousness, the tricky ways the ego trips us up, and the acceptance of our own divinity right there next to our humanness. I sigh at one point, profoundly sad at all the time I’ve wasted with my resistance to what is, all the good right in front of me, living life on life’s terms, and how much I’ve been captured by a fear-based culture.

But, this is not the moment to linger in regret. Right now, in this moment, I sit in a metaphysical book group with six ladies and two men, one my elderly father whom I love with a fierceness that scares me sometimes, and a fear that I will crumble and blow away when he passes on, which can’t be all that far away, given that he is old. But, right now, he is alive and next to me and we are sitting on a darkening Sunday night in Saratoga Springs with a lovely group of spiritual human beings sharing insights and our daily challenges to transcend all the big and little problems of life in 2017.

Reverend Joanne brings us to a close promptly at 7:00. As we start the trek down the long hall and back to the elevator to his apartment, Dad says, “I feel like I spoke too much, as always.” I say, “I don’t think so, I think everyone appreciated what you had to say.” I think for the hundredth time what a good professor he would have been – funny and humble, overly prepared and diligent in his prep.

Back in the apartment, Dad sinks into a worn chair largely devoid of any structural support, and we all settle in to wait for Tom. I check my phone and see a cheery text from my sister-in-law, which says, “Hi, Tom has been at work all afternoon to make up for tomorrow’s absence, he just left for Dad’s!” That means at least an additional two-hour wait for the rest of us who have already been together since mid-afternoon. This family of introverts is fast approaching their max for togetherness and everyone is getting tired. I groan, complain loudly, like I am about five years old, and then decide to practice what I just immersed myself in for an hour. I can’t do a thing to change this specific situation other than to leave and we aren’t going to do that. We want to see Tom. Instead, I literally give my body a little shake to fling off the irritation hanging on and make a conscious decision to not get sucked down the same old rabbit holes of criticism and judgment and wanting the circumstances to be different than they are.

Together, we watch 60 Minutes and then a funny Frasier episode. Dad’s laughter ricochets around the entire living room, crowding out any of his daughter’s fret waiting for her younger brother. And when Tom shows up two hours later, at 9:22, I greet him at the door with a big, welcoming hug – and mean it.

Reader’s Invitation: How does your resistance to living life on life’s terms show up for you? How do you respond? What works for you? What doesn’t? Always appreciate anything you feel called to share.

I will usually respond to your comments within 24 hours.

2 thoughts on “A Sunday Evening with Dad in Saratoga Springs: A Chance for This Apple to Fall Farther from the Tree”