I don’t know about you, but when I hear something more than once in a short period of time, it grabs my attention. Recently, that something was the Starfish story.

The medium was the League of Women Voters Luncheon, a surprisingly tasty repast of grilled salmon, au gratin potatoes, glazed carrots and a too-large hunk of a sheetcake iced in red, white and blue, followed by a panel of ex-cons and activists making a strong case for restoring voting rights to convicted felons in Florida once they’ve done their time. 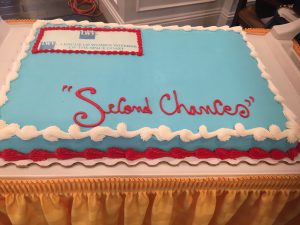 The messenger was Tom, a former educator, with Paul Newman-blue eyes, not one whit dimmed behind his wireframe glasses.

He said, “Beth, it took me a few minutes when I saw you come in to place you from the writing class.” Boy, do I know that feeling – seeing someone you know you know, but can’t quite remember from where, can’t quite recall the context, and end up looking at them with a friendly but distant gaze until…you remember.

Anyway, context re-established, he and I blabbed on like old buds, which we were from the writing class, where we had opened up a vein or two to reveal our private selves. Tom is one of those great listeners. I could feel his empathy and attention across the table, and after listening to one of my drafts, something about Mom and her descent into Alzheimer’s disease, he said, “Beth, stop it, stop it, you’re killing me!” I just loved that! Not only was he obviously touched by the piece, but he said it in a tone that said KEEP WRITING, more, more.

But, I digress. Back to the luncheon. At some point, I swerved into politics with Tom, which is not hard to do given the current state of affairs and my general state of upset (extreme). There is a lot of incoming these days – probably too much, from: newspapers, TV, the radio, social media, one-on-one interactions, etc., and I often find myself mewling to Jim, “We are in trouble, we are in trouble.” I’m not exactly sure what I’m looking for from him or any other. It’d be nice if everyone agreed with me, but I’m coming to accept (slowly and sadly) that that’s not likely. I do think that I am looking for comfort. Does it even exist when it comes to our politics?

The problems are many and sundry. In the age of Trump (which too shall pass), we are living with a President who delights in dividing us — and it’s alarming to witness how easy that is to do. What does that say about us? What does that say about me? Of course, he is more effect than cause, but I thought his job description spelled out this: I will to the best of my ability do everything I can to unite the American people.

This Administration is hard to stomach and I blame my poofy belly on him. I’ve been eating a lot more dark chocolate with coconut flakes since he took up occasional residence in the White House. Doesn’t take Freud to see why I, or any of us, may be craving more sweetness in our lives. But beyond the short-lived surge of a sugar high, I struggle with what is mine to do – when to act and when to be still and let the processes play out.

During my lamentations to Tom, I jump off the Trump train and skid into a digression about my daily trash-collecting on the beach. Together we marvel at the unbroken string of days of oppressive heat and heavy rainfall flooding the Space Coast since September. And since Irma blew through the weekend after Labor Day, the amount of trash on the beach has just been awful. During what used to pass for normal, my medium-sized bucket and a single bag was more than adequate for tidying up. However, as we know these are not normal times. I am barely making a dent in the detritus.

“Does it make a damn bit of difference?” I ask Tom.

He refrains from providing a pat answer and instead asks, “Do you know the Starfish story?”

I don’t so he tells me a version* of it: Once upon a time unruly weather stranded thousands of starfish on the beach. An old man walks on the beach and sees a young boy in the distance bending down, picking up an object and throwing it into the sea. When he gets closer to the boy, he asks, “What are you doing?” The boy says, “Putting the starfish back in the sea. The tide has washed them up and they will be stranded at low tide and die.” The old man says, “But there are so many. I am afraid you can’t make much of a difference.” The boy keeps his focus, bends down, picks up another starfish and throws it in the ocean. He says, “It makes a difference to that one!”

I leave the luncheon feeling better. I’m not sure why, but I suspect it’s a combo of factors: spending time with the ladies of the League who know a thing or two about persevering despite long odds, the interaction with Tom, and listening to the Starfish story. Then that very night on TV, a celebrity mentions the Starfish story. This time the little boy is a little girl and the old man is now a group of naysayers, but the message is the same: any effort is worth it, no matter how futile it looks on the surface.

The next day when I am walking on the beach in the late afternoon, I see a flash of white against the browning seaweed by the water’s edge. 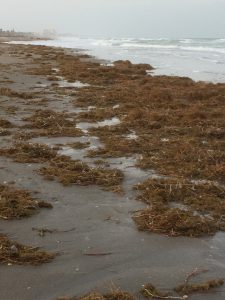 At first, I think it is just a piece of plastic or Styrofoam, but as I get closer, I see it is a hatchling, a baby sea turtle flipped on its back. My first thought is this: It is dead. But then I flip it over and it moves a flipper. Oh great, now I have to do something. But in this specific, individual circumstance, I know what to do — and what not to do. I know to not put it back in the water because it will likely drown, but instead to carefully place it in my bucket on a bed of seaweed, drive to the local drop-off site, place it in a cooler with other hatchlings, careful to clamp the top and secure it from prying racoon paws, and wait for the Turtle Preservation people to show up to do their thing (rehab and return the hatchlings to the sea).

I call Jim and make arrangements to do just that. On my way to meet him I see a couple dropping a hatchling back in the ocean. I run up to them, careful not to bounce around my little turtle and call out, “Wait, wait, stop!” and stand there helplessly as the waves crash in and wash the baby out. But, then the waves bring it back in. The guy reaches down and plucks it out of the surf. He says, “I’ve got it.” Careful to modulate my frantic energy I start with, “I know you are trying to do the right thing,” before unspooling my turtle spiel.

Minutes later, I continue on my way with two hatchlings in my bucket. 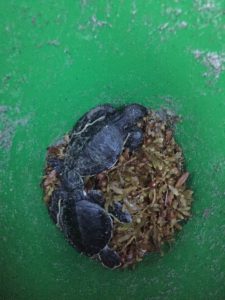 In the distance, I spy a turquoise shirt and know that Jim is here. Hooray! We finish our mission as dusk falls and a silvery sliver of the moon hangs in the sky.

The odds are stacked against the baby turtles. There is a 1 in a 1,000 chance he or she will make it to adulthood.

And all that got me to thinking about Trump and the Starfish story. These days I struggle with what is mine to do. When do I take action? When do I just let events unfold? How do I hew to an aspirational vision of the United States, a place of freedom and justice for all and where truthtellers are revered and not reviled? How do I live with myth and reality?

I suspect that the starfish and the turtles are providing guidance about how to live with paradoxes. I suspect that while it’s important to hold to the higher good and to not lose sight of the big picture and to hold our elected officials accountable, and to shine big, bright lights on all the dark money in politics, it is important too to do what I can where I am in my immediate surroundings, and to simply be who I am — one little lady who mattered to two little hatchlings on a recent Saturday night.

Reader’s Invitation: Tell me about your synchronous moments/stories. What happened? What did you do or not do as a result? How do you respond to that tension of doing/action and not doing/witness?

Please be advised that I will usually respond to your comments within a day.

4 thoughts on “Starfish and Turtles”