After Irma – Life in the Bucket House

Irma blew through four weeks ago. She shook things up, that’s for sure. We are all living in the aftermath. 7,000 homes and business were damaged in the county, including Ray and Sonya’s up the street. The owner has no insurance and will not be making repairs. They are homeless, in weirdly buoyant spirits about it all, but still homeless.

Our roof is leaking, but hasn’t blown off, and Jim keeps saying, “It’s not going to collapse, dear.” 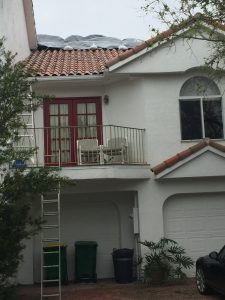 Still like many others, we are reevaluating, reexamining just what it means to live here — and if we want to continue to do so. There’s unease in the air – I can feel it as tangibly as the humidity that drops over me like an invisible cloak as soon as I step out of the air-conditioned comfort of our home. Global, national, and now local chaos – it is what is here NOW – at least on the surface. And on the surface, I bounce around like one of those balloons I chase down on the beach, untethered and directionless, at the mercy of the wind.

Yesterday, at an Open House for a condo with hypnotic views of the Banana River, the realtor’s wife tells me that they are looking for a new place to live because Irma flooded their street, stopping just a foot from their house. “We want to be higher up,” she says. She tells me that they would buy this condo, but it has a strict two-pet limit, and they have three cats (just like us). So, this condo is out. 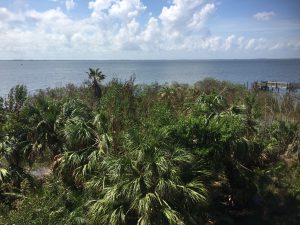 We wonder if we are condo people. Condo-dwelling friends say, “You have to be prepared for everyone to know your business.” We don’t exactly lead a wild lifestyle so we don’t care too much about busybodies, but we do chafe at rules and restrictions, limited recycling, unpredictable association fees and special assessments.

Irma makes me ponder our saneness about continuing to live here. There will be other violent and destructive storms. No question. We dwell on a mere spit of land – sometimes when I fly away from here, the plane wings over Cape Canaveral and I catch an expansive overview of just how skinny this narrow barrier island is – located between the Atlantic Ocean and the Indian River Lagoon. It is a sobering image – our vulnerability.

Are we really Florida people? Our Chicago-area brother-in-law says, “There’s something no matter where you live.” For eight years, I lived in College Park, Maryland, and one day there a F-3 tornado blew in and lifted a car and its two occupants high over the University of Maryland campus before crashing to earth. The girls inside the car died. Indeed, there is turbulence no matter where you live.

Our mortality and employment too raises concerns. We have more yesterdays behind us than tomorrows in front of us. Jim’s father died at 59, and while mine is still not pushing up daisies as he likes to joke at age 92, he quit working at 60. Jim left behind 60 several years ago and is still going strong – hooray! – and has no immediate plans to quit working. So at least for a few more years, we need to stay here, which brings us to our present abode – a rental we’ve called home for 12 years.

It was always meant to be temporary, but for a host of reasons: dramatic, tall windows, lots of natural light, numerous balconies for cat exploration, close proximity to the beach, dream landlords, a quiet neighborhood, congenial neighbors, reasonable rent – we have stayed. But, since June 8th, we have been living under a compromised roof. The deterioration is progressing in the way these things do when they are not attended to promptly.

Irma aggravated the roof over our heads. Now when it rains, which it does here, especially during hurricane season with frequency, volume and velocity, anxiety hijacks any serenity as it rains in. Rain drops falling on my head used to make me want to belt out B. J. Thomas and would instantly evoke images of Katharine Ross riding around on the front of Paul Newman’s bicycle in Butch Cassidy and the Sundance Kid, but now it just jolts me from sleep, heart thumping in my chest. If I’m in the house, I lose focus doing whatever I’m doing, and feeling slightly nauseous wander around checking the major leaks: the seam on the third-floor ceiling that drips into my office and the living room, the fireplace, or the closet in the bedroom that occasionally gushes water like a spigot turned on in between the steady pings of drops. If I’m out, I dread coming home wondering what the hell is happening inside. And we wonder too just what’s going on behind the scene. What’s the deal with mold and mildew? We just don’t know. Meanwhile, we line railings and floors with shower curtains, tarps and towels and set out buckets. We joke about a future day when we’ll be sitting around in raincoats and raising umbrellas to shield ourselves from the inside precipitation. 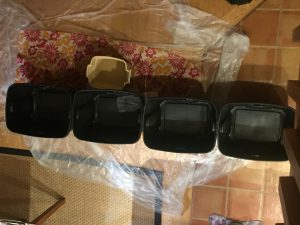 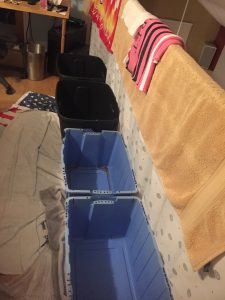 But, most of the time, I don’t find it amusing. Repairs are at least months away.

I’d like to say that I’m handling this all with equanimity and good humor. But, that’d be a lie. I find this situation challenging – this fine line between doing what I can, and letting go of all I can’t control, which is much, if not most of it. Ceding control does not come easily. In fact, I remember distinctly Jim saying early on in our relationship that I like to try to control the uncontrollable.

Recently, I read that elevated cortisol levels can also age your skin and I wonder if that’s part of what’s going on with my saggy face – in addition to just the normal process of aging. Just last night I read that actress Frances McDormand said that at 60, she has entered into invisibility – an age where women are no longer viewed as relevant – or with desire. She seems to find it freeing. Like accepting our current state of disrepair, I’m not there – yet.

This living in paradox is damn hard sometimes – discerning what is mine to do and letting go of the rest and trusting the friggin’ process. I suspect it’s what you do as an adult. I suspect too that it helps to have a strong spiritual connection to something greater than the little self.

I dreamt last night that I failed at three different tasks – don’t remember the tasks specifically, but do remember the feeling of failure and frustration and keeping it all together until I was sitting with my mother (who was alive again) and telling her the story. And as she listened, and made comforting supportive sounds, I broke down and wept. When I awoke I felt better — grateful for receiving this gift of mother love from the great beyond when I desperately needed it.

Reader’s Invitation: What situations have you endured or experienced that required you to surrender control? What helped you get through it? Please share. You can generally expect to see your comments and my response within 24 hours.

6 thoughts on “After Irma – Life in the Bucket House”