Rain batters our fragile roof, which has been leaking for the last three months, and is now covered with a thin, blue tarp as we wait for repairs. Too late now, the tarp is in tatters. 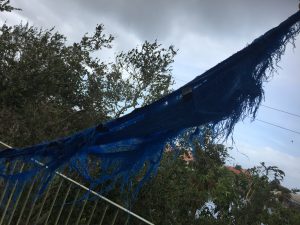 Rain pounds against the windows. It sounds like bacon frying in a hot skillet – short, staccato beats against the windows. I tamp down an urge to run outside. If I were stupid enough to do that right now, I know the rain will sting my face and drench my clothes in seconds. There is no keeping dry in this kind of rain.

No newspaper delivery today. That’s not a surprise, and yet I am surprised by how let down I feel without our papers. I actually feel bereft for a few moments when they are not lying near the back tire of Jim’s Toyota in their blue sleeves. Instead, I pull up The New York Times on Jim’s iPad, which is hardly a hardship. Nothing like a hurricane looming to bring things into sharp relief, like how wedded I am to my habits: like reading an actual paper newspaper. I fear I am part of a dying breed, an aging lady who craves the actual feel of the newspaper, the tactile turning of the pages. It just isn’t the same on the iPad. Yet, the content is all there – and I go to the Op-Ed section and start a piece, “Trump’s War on Science,” which is probably a masochistic choice as Hurricane Irma bears down on us.

Yellow and green palm fronds catch my peripheral vision as they fling themselves against the window on my left. I pause my reading to check on the leaks: the wells in multiple windows are soaking the paper towels I stuffed in them at an alarming rate, and the spare litter box in the fireplace is about a 1/3 full of water. I pull out the litter box carefully to avoid spilling it on the hardwood floors as I carry it over to dump down the kitchen sink. I set it back in the fireplace and then hear another steady plop, plop, plop.

When we first got married, I used to hear Jim clinking ice cubes in a glass a floor away and he liked to say that I have the acute hearing of a bat. Now, I imagine my ears twitching trying to locate the source. Ah, this one is in the master bedroom closet. Jim hears it too and as he shines the blinding light from a newly-purchased flashlight up to the ceiling, we stand transfixed watching drops form, hang for a second, and then plunk to the floor. 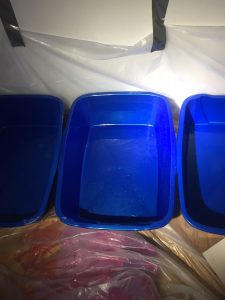 We unfurl a clear plastic tarp, set four blue bins on top of it and pad back to our reading stations.

The wind gusts rattle the very bones of the house. I feel uneasy. I consider that this deluge is a mere squall, and we are still hours away from the real show, peak intensity, full onslaught. I wonder: Did we do the right thing to stay here?

However, we are packed to leave, to a pet-friendly shelter, if necessary. By the steps, sits one suitcase per adult, a mountain of reading material, a waterproof container of our important papers, the cats’ rabies certificates, three cat carriers, three cat boxes, dry cat food and litter, Catsby’s medication, raingear, sheets, pillows and sleeping mats. But, at some point, it won’t be safe to leave.

We left during Hurricane Matthew last October to stay in the pet-friendly Homewood Suites in Maitland, just north of Orlando. But, this time, despite calling days ahead, there are no vacancies within a three-hour radius – and we are not leaving our pets. And, where would we go? West doesn’t work given the track of the storm. East doesn’t work since that’s the Atlantic Ocean. North means sitting on the highway with the other thousands of evacuees.

Dad calls. I can hear the worry in his voice. “We are planning on staying,” I say. “We won’t be stupid,” I say. ”We will seek shelter, if necessary.” The phone pings with texts from friends and family – concerned and caring. The phone pings with tornado warnings, TAKE SHELTER NOW. One touches down a few miles south of us at Patrick Air Force Base.

Just as I finish loading the dishwasher with dirty supper dishes, the power goes off. Just like that it is dark, and the a/c shuts off, but the computers beep for several minutes as we scurry around to turn off the auxiliary batteries. Jim says, “It’s a lot scarier in the dark.” Yes, it is. The winds are intensifying.

Jim is in no hurry to move to the lower floor room, but I am worried about tornadoes touching down around us, about our roof blowing off, about the leaks, and especially about gathering together all three cats in time. The youngest, Catsby, is a master of disappearing. Partly his behavior is just a smart strategy to avoid Cody, who likes to lie in wait for him at the top of the stairs and get in a hiss and a swat or two as Catsby runs by him. Sometimes though we can’t find Catsby for long stretches of time, but then at dinner he magically shows up, casually strolling in from some hidden hidey hole.

But now the cats are surprisingly easy to corral. I’m trying to stay calm and not generate that aura of anxiety like I do when I’m trying to capture them for a vet visit. Usually this first-floor room where we are sheltering is off limits to them, the one room in the house that I like to keep fur-free. As my younger brother, Tom, likes to say, “You have cats, you have cat hair.” We have found this to be true. Once in the room, they are quite happy to sniff new smells including us as we grow increasingly pungent with sweat.

The storm gathers in ferocity. Windows rattle. I lie on top of the sheets, sweaty. I drape a wet dish towel around my neck. Cody comes by for a pat now and then and I hug him close until he purrs. Then I release him. Jim snores. I yell at one point, “Stop it!” He snorts, turns over and starts to snore again. In my head, I keep trying to find words to describe the sound of the wind. It kind of sounds like a nor’easter, but not quite. It’s got a howling quality to it that is unique. I’ve never heard it before. The house trembles. I wake Jim and we go upstairs flashlights lighting our way to check on the leaks. Rain is gushing in through the balcony doors in the bedroom. On hands and knees, I sop up water and ring out towels while Jim duck tapes dry towels in place. It feels futile. We empty the container from the fireplace again, refresh paper towels in the window wells and go back downstairs to pass the night.

Jim snores, the cats walk on my head, and pull my hair. I am scared, but not terrified. It’s also kind of exciting. It’s all so elemental. I feel an urge to dash outside and get whipped around in the wind, but good sense prevails and I stay put. The wind moans in frequencies I’ve never heard before. I must sleep some because then it’s daybreak.

It is quiet. That’s the first thing I notice. Jim is gone, but not sucked up and out through a hole in the roof, just outside, clearing debris as it turns out. All three cats lie around me on the bed, like points of a triangle – not in the least perturbed.

I open the front door and go out to the voices. Our neighbor says, “Ray lost his roof.” We wander up the street. It is true. Ray’s roof is in the tree next door. We offer our condolences and our support. It feels so puny. 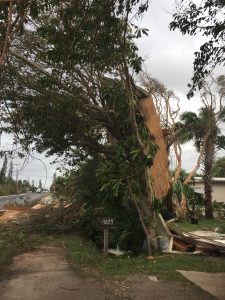 Street signs along A1A bend to the ground. 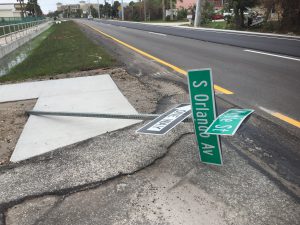 Wires lie in the road; cops block through traffic. Trees lie on their sides roots hanging in the air. Swales overflow with water. 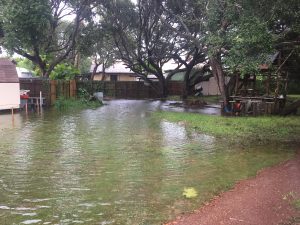 A fine layer of sand and salt covers everything. The landscape, usually lush-green, is now gray and brown. 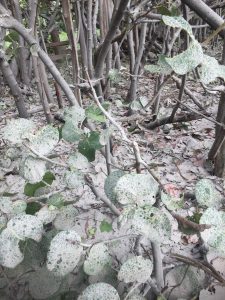 The lights come back on and the fans and the a/c. Our neighbor texts, “Thank you, to the heavens above.” We sleep in the cool air and delight in having to pull up a sheet to cover our shoulders feeling a tad chilly.

Oh, no! The power goes off again. The good news is that the water comes on a few hours later, just minutes after Jim returns from the public park down the road in Satellite Beach with four, bright-red containers of water, 20 gallons in total, which was going to be good for multiple toilet flushes.

The newspaper says FPL hopes to restore power by the end of the weekend. We are resigning ourselves to another couple of hot, humid, sweat-filled days and nights. However, when I come home from a yoga class (with a/c and where a woman I know only casually offers her spare bedroom for as long as we need it) Jim is dancing in the driveway. Could it be? Yes, it is. The power is back on. Thank you, to the heavens above.

Reader Invitation: What experiences have you been through that gave you a new appreciation for simple things, or things you took for granted?

8 thoughts on “Waiting for Irma”