Recently, I meet a woman on the beach who does two things that I never do: (1) wear a bikini, and (2) twirl a hula hoop. She is a rare sight, not the bikini part — but the hula hoop part.

When I first stroll past her she is just another anonymous blonde woman, sitting under an umbrella with bright yellow and blue stripes that pop like candy for the eyes. I envy the shade the umbrella throws over her, the sun has been such a bully lately, relentless in its searing heat.

I mostly look down when I walk on the beach, intent on stabbing bits of plastic and other trash that washes up on the sand. I release my grip on my stainless-steel picker over and over again and drop the detritus into my bright, blue bucket. Plastic bits drop silently, crushed cans scrape the sides with a satisfying plop.

But, for some reason, after I walk a block I look back over my left shoulder and see a fit, blonde woman in a bikini moving on the beach. At first I think she is dancing, but as I keep looking and blinking to see more clearly, I realize she is twirling a hula-hoop. My spirit soars and lifts my whole body, straightening my spine as I watch her move with such unselfconscious, childish abandon, something I rarely allow myself to do. Basking in my warm glow, I then do something out of character — I turn around and walk back to her. 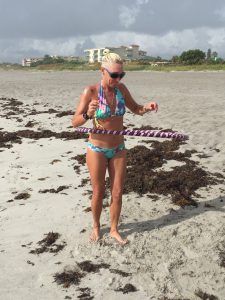 “Sure,” she says, and then introduces herself.

I don’t hear her clearly and say, “Lori?”

Oh, okay, I think: no K, no i to muck up the works, just C-o-r-y. However, this svelte, friendly woman is anything but plain.

As we talk, a little dog slinks out from under the umbrella for a sniff and a pat.

Marlon is a cutie, a black and white rat terrier, I judge to be a few pounds lighter than our largest cat, Cayce, who is a bit chubby. I bend down to pet him on the side of his body, careful to avoid his head.

Recently, on the Esquire Network’s Going Deep, I watched the comedian, David Rees, give instructions about how to pet a dog. He said, with emphasis: “Never, ever start at the head.”

When I was a child, back in my hula-hooping days, my brother, Bill, violated Rees’s Rule when we were visiting friends with a big dog and a wagging tail. Pat, pat went Bill’s hand on the dog’s head. And, in a split second, the dog’s tail stopped wagging and its powerful jaws clamped down on Bill’s hand. He yelped, I screamed, my mother yelled for my father. I expected only a bloody stump to remain, but when he yanked his hand out of the cur’s mouth, he still had all his digits amidst several nasty, bloody bites that eventually healed. However, his little sister sustained a permanent scar, a fear of strange dogs.

But, I have nothing to fear from little Marlon. Still, I confine my pats to his side while he wiggles and whips his tail back and forth creating a vortex of happy energy.

Cory moves with grace and coordination as Marlon plops down to watch.

“Has Marlon ever caught a real rat?” I ask.

“No,” Cory says, and adds that while she has chickens that attract rats and mice, Marlon doesn’t catch them. She says Marlon is getting old and sadness hangs in the air as we acknowledge that the aging Marlon has probably left his rat-catching days behind him, just like my hula-hooping days, when I was young and moved with quickness and grace. These days, I often feel like the Tin Man before Dorothy oils his joints. I bet old Marlon can relate. I consider asking Cory if I can give the hoop a spin, but I let that moment pass and watch it wash out to sea.

Thunder growls in the distance. “Is he afraid of thunder?” I ask.

“He doesn’t much like it,” she says, and volunteers that they recently swaddled him in a towel during a storm and that it seemed to help. For some reason this is how I responded: I said that I used to work at a psychiatric hospital and when the patients got agitated, one treatment was to wrap them in cold, wet sheets. Horror flashes across her face and I immediately back pedal, kicking up sand, and sputter, “They don’t do that anymore.”

A moment later that weird confession is forgotten, I hope, and a soft rain starts to fall. Her husband emerges from the sea, all tan and buff, surfboard tucked under his arm. We exchange pleasantries and I go on my way.

A block away, I turn around one more time. Marlon has retreated back under the umbrella and Cory is back to playing, hula hoop twirling around her hips and waist on a hot, sunny-rainy day.

Reader Invitation: Do you play? How do you play? If not, why not? What would you like to take up with abandon?

4 thoughts on “Bikini-Clad Blonde Hula Hoops on the Beach”