Three Bras and a Bottle of Bombshell

Yesterday, I did something I don’t usually do. I shopped at Victoria’s Secret. I didn’t mean to. It just sort of happened.

The “Plan” for the morning was to drive over the causeway to the library on Merritt Island about 25 minutes away to evaluate a new student for literacy services. After exploring a wide range of opportunities, I recently signed up to volunteer with the Literacy Alliance of Brevard. After attending a couple of live workshops, spending a day getting certified to administer a standardized test, which brought back all my own testing anxiety with a vengeance (shaky hands, flop sweat, heart palpitations), suffering through a slew of confusing back and forth e-mails with a variety of personages in their office, and after playing phone tag with the student and spending umpteen number of hours questioning my ability to fulfill my volunteer duties, despite more than a decade of teaching and tutoring experience, and worrying about every single solitary thing that could possibly go wrong or right or might happen, I was set to meet him at the library at 9:00 a.m.

After making a scary, tire-screeching, death-defying left into on-coming traffic, I pulled into the library’s parking lot. It was 8:38 a.m. By 8:40, I was sitting on the lone bench in the side yard watching a squirrel pulse its tail and smelling freshly-mown grass. 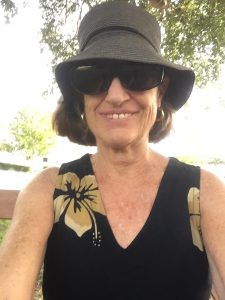 At 8:58, I joined two men and a teenage boy wearing headphones outside the front door where we commiserated about the hot, sticky heat, and at the stroke of 9:00 we rushed in to the cool air of the library lobby as the automatic doors whooshed open.

After I stopped by the front desk and checked out the room I’d reserved, I sauntered back to the lobby to wait for my student. He was to identify me by my red purse and I him by his handlebar moustache. I was sure we would find each other without difficulty. But, alas, no student bounded over the threshold and through the automatic doors. At 9:10, I called him, got his voice mail and left a message that I hoped he was on his way, and if not to please call me as soon as he could to let me know what was going on.

Then, I plopped down on the couch in the lobby to wait. I said, “Good Morning,” to old coots, young men, middle-aged women and young mothers trailing kids and pushing strollers. Every time the doors opened, I looked up expectantly. At 9:45, I bid adieu to Veronica at the front desk and drove a few miles to the mall with the car windows open and the a/c off to chase away the library chill.

Plan A morphed into Plan B with a new destination, Lenscrafters. Since cataract surgery in January, I’d been making do without prescription sunglasses and instead pulling large Sun Ray plastic frames over my new specs. I’d dropped the Solar Rays the day before on the floor and although the handy spouse had snapped the wayward lens back into place, I felt their days were numbered. So, after asking for guidance from Gaylene at Lenscrafters, and using a coupon they sent me for my birthday, I ponied up $303.00 for a new pair of Ray Bans with progressive lenses. They would text me when they were ready.

That’s when I wandered into Victoria’s Secret, directly across from Lenscrafters, where I immediately felt ill at ease surrounded by tables and racks of panties and bras. I’m not sure why. After all, I’ve been wearing panties and bras for many decades, but generally not the lacy, frilly, see-through type spilling out all over the place throughout the store.

A sales lady immediately rushed to help and I literally took a step back from her when she said, “Do you need bras? I’m a professional bra fitter, here from another store.” Back home, my chest of drawers is filled with bras I don’t wear, but in that moment, I found myself thinking, Well, maybe I do need bras. However, the thought of baring my breasts in front of this lady and letting her see the crummy once white but now faded gray bra I was wearing with large safety pins to keep the straps in place was more than I could bear in the moment, and I just nervously laughed and started pawing a rack of stretchy tights. 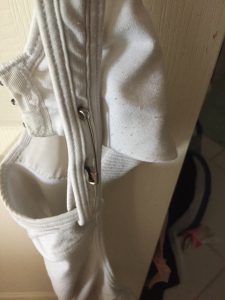 The bra fitter hovered nearby so I asked her about the tights. “What size do you think I’d wear? I’m thinking a medium.” She concurred and then said, “Let me give you a coupon for a pair of panties,” and rushed off to fetch the coupon.

Twenty minutes later I left with my pink and cream Victoria’s Secret bag stuffed with three pairs of tights, a pair of polka-dot panties and a VS towel (complimentary for spending more than $75), which I paid for with my plain old Visa card and not the Angel card they wanted to sell me, even though it would have given me an additional $15 off my order. 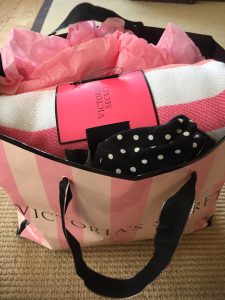 Then my phone buzzed; my Ray Bans were ready.

The next day in between chomping on popcorn and kissing Cody on his cute little cat head, he and 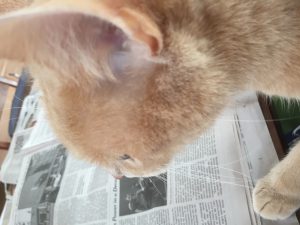 I read an article in The New York Times, “Steady Paycheck, Shaky Income, Rising Angst,” which said how hard it is for a large swath of the population to find stability because they work jobs with ever-changing schedules. One of the employees profiled in the story works at a Victoria’s Secret in Ocala, which is about 75 miles west of us and is sometimes described as horse country. But, I suspect that this employee does not ride horses. She makes $10 an hour and sometimes her schedule is 15 hours a week and sometimes it is 39 and sometimes it changes with little notice. When asked if the company provides benefits, she said it did, and I crossed my fingers hoping she’d say that they contributed towards healthcare or retirement. But, here’s what she said, “We’re given three bras and a bottle of Bombshell, their No. 1 selling perfume.”

The student called late in the afternoon and said he had a mishap with a knife that sent him to the hospital. We are in the process of rescheduling his session.

Reader’s Invitation: I would love to hear your comments. They come to me to approve prior to posting since the site attracts some grossly inappropriate messages. I will generally respond to your comments within a day. Thanks!

4 thoughts on “Three Bras and a Bottle of Bombshell”