Every morning as part of my routine (when I remember), I draw a Tarot card from the Rider-Waite deck. There are 78 cards in the deck and some of them lift my spirits like the Magician, a robed figure connecting heaven and earth, and the Fool, a jaunty figure accompanied by his little dog stepping off the cliff into the abyss and some grand adventure. 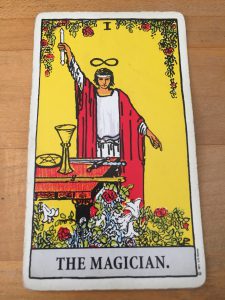 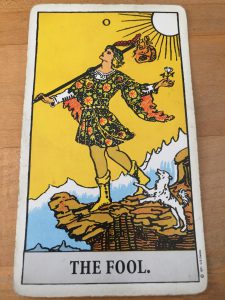 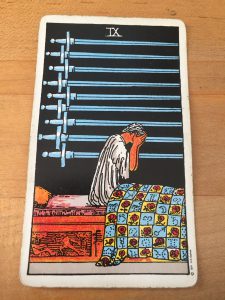 There are some that make me nod my head in recognition of my ego-driven neurotic self like the IX of Swords, showing a distressed woman sitting straight up in the middle of the night, head in hands. Her insomnia parallels my own.

This morning, I randomly draw The Hanged Man, and a little involuntary gasp of pleasure escapes from me. The Hanged Man carries lots of messages but the one I hear is this, “Change your perspective.” Not a stretch there in interpretation, since the figure is hanging upside down on a cross, but I do note the halo. This is holy territory. 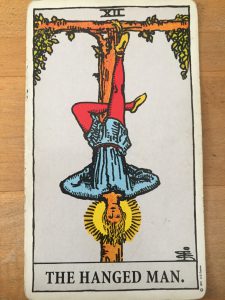 So, I start the day surrounded by the energy of The Hanged Man. I don’t give it a second conscious thought as I go about my usual business. But, I know after decades of practice, that something, some archetypal energy seeps into my unconscious, and curls up like a napping cat with one eye open, one ear slightly cocked awaiting return to full wakefulness.

About 4:00 I dash over to the beach. It’s a warm day, near 86 degrees, and the sand is hot, searing the soles of my tootsies. I carry my trash-picking gear, my Vive 32” spearer (guaranteed for life, although this is number 4 for me), my two-gallon, bright blue bucket from Lowe’s, and a grocery-size plastic bag.

At the water’s edge, I swivel my head left and then right. There are more people to the left so I walk south. I pass an encampment not far from the water’s edge: a couple of chairs, a couple of towels, a backpack, and lots of empty liquor cans, bottles and cartons, hard cider and Lime-A-Ritas. 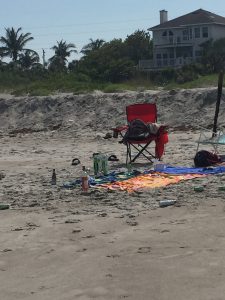 In the water, half a dozen young people, four guys, two girls, frolic in the waves. They look like children at first, but then I squint and place them just out of high school and into college. They are loud and boisterous. They look like they’re having fun and I don’t want to be a buzzkill, but I have this sinking suspicion they are going to leave their trash on the beach when they quit their booze-filled play for the day.

Who are they? It’s kind of late in the season for spring break. Are they out of school already? The day before I passed a similar complement – buff and brash and scantily clad, and also drinking a lot. What they share is they don’t give me a second look – and it dawns on me that I could be their grandmother. Now, that’s a sobering thought.

By the time I returned from my walk yesterday, this previous day’s cohort had left the beach taking towels, chairs, tents and themselves, but left their trash. 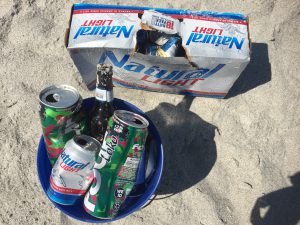 I cursed them under my breath and thought, I just defended you (and your ilk) recently when a local blamed all the trash on “those people” from Orlando. I said, “Oh, I don’t know about that. I think it comes from a variety of sources.”

So, here I am a day later passing a similar group with a similar booze-emanating vibe and ugly thoughts pass through my always active brain like labeling them all “ungrateful brats,” and I bet you’re going to leave your trash behind when you go.

But, then I have other thoughts that go something like this: Well, you could stop by on the way back and pick up their trash and/or talk to them. Where did that come from? Could it be emanations from The Hanged Man? Who knows? It doesn’t really matter, but maybe I could change my perspective, and instead of spinning into self-righteous anger if they leave a mountain of trash behind, I can short-circuit the process, save myself a bunch of self-imposed grief and maybe even have a teensy, tiny bit of influence.

When I walk back, they are indeed still there, two guys with dark curly hair wearing long swim shorts lounge under a half-tent they’ve somehow erected. I deliberately pull back any angry energy and aim for neutral as I enter their space and start to spear crumpled Lime-A-Rita cans and plop them into my bucket. One kid, attempting to rise to his feet, but staggering sideways slurringly says, “Thank you. Thank you. I think the world of you, ma’am.” (Yes, he called me the dreaded “ma’am,” which always makes me feel ancient).

I say, “Just want to make sure that you are going to pack up your trash when you leave.”

He says, “Honestly, I can’t tell you that we are.”

In that moment, as he staggers in front of me, I think, Well, I appreciate his honestly. He asks me several times to sit down and join them so they can get to know me.

“No thanks,” I say, but then add, “I used to drink to excess too.” So much for being neutral. But, who am I to judge? I remember very clearly doing a lot of stupid things fueled by booze when I was that age (and older). Mostly, I want to communicate with them, not lecture exactly, but still make a couple of points.

“Where are you from?”

“Is it spring break?”

“It is for us.” He laughs like that’s a real side-splitter.

I spear a view more cans, clink together a few bottles as I drop them into the bucket and sniff the significant alcohol content when I pour the dregs from a dead soldier onto the sand.

“Are you staying at The South Beach Inn?”

He assures me that one of the frolickers in the water is the designated dude.

“Are you going to throw up in his car?”

Great, I think to myself. “Well, get home safely,” I say.

He stagger-bows towards me as I walk away toting their trash. 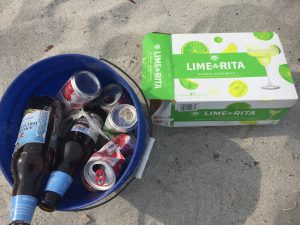 Reader Invitation: Tell me about a time when you “broke” character and related in a different or new way. What happened? How did you feel? What was the impact?