“We all are born with a certain package. We are who we are: where we were born, who we were born as, how we were raised. We’re kind of stuck inside that person, and the purpose of civilization and growth is to be able to reach out and empathize a little bit with other people.” Roger Ebert, Life Itself 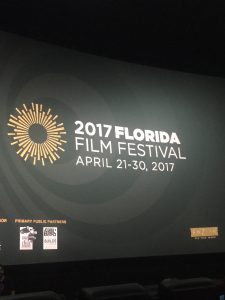 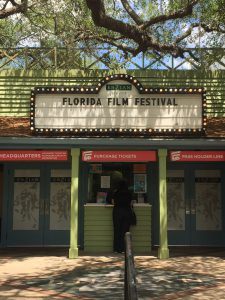 Last week I had the privilege of attending the 26th annual Florida Film Festival in Maitland and Winter Park, just north of Orlando, which showcased 175 films over 10 days. My version, while a tad shorter, was still an ambitious schedule of 10 films in 3 days. Brief synopses follow. 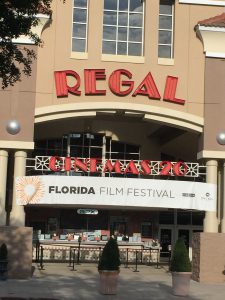 For over 50 years, the White family has run the Broken Spoke, part honky tonk, part dance hall, full-time treasure in a rapidly gentrifying Austin. It’s a family affair where country music legends come to be born in a tumblin’ down kind of place. Mom and Dad book, cook and keep the place running while their two daughters teach nervous newbies how to two-step, and lovingly craft Dad’s elaborate bead and sequin shirts.

The Takeaway: Worth a trip to Austin to bask in the ambiance of this unique local institution and learn to Texas two-step with Terri White.

Brooke Guinan, a third-generation New York City fire fighter, tells her story of finding her true identity as a trans woman including on her job as the first openly transgendered firefighter in the NYFD, a hyper-masculine environment of 10,000 men and just 41 women.

The Takeaway: This film also sensitively captures the process Brooke’s parents go through to come to terms with their biological son transitioning to a daughter. Women are just .004% of the NYFD department. Yikes!

Danny Houck, a young guy in his 30s, with bi-polar disorder and more than a few attentional issues (and maybe a mystical channel to ancient masters) commits to crafting a world-class violin (a replica of Guarneri’s Il Cannone) for virtuoso, Razvan Stoica, in his dilapidated farm house in rural Ohio with a deadline looming. 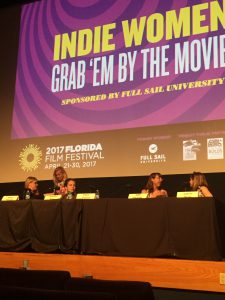 Professor Anne Russell and Filmmakers: Jennifer Brea, Dorie Barton, Julie Sokolow, and Valerie Weiss share how they persevere in an industry unfriendly to women. Women make up only about 5% of Hollywood directors, about 20% of documentary filmmakers, and about 43% of the filmmakers screening films at this festival.

Takeaway: We still have a long way to go, baby. All sexes need to own their unconscious biases. This is one tough business, and regardless of gender finding funding, an audience and distribution is a bitch.

First-time filmmaker Amanda Bailey convinces an Arabic teacher and divorced mother of two young children to allow her to accompany them as they flee Syria and travel (mostly on foot) through Greece, Hungary, and other countries before finally finding asylum in Berlin (after being turned down by the United States).

The Takeaway: There is no “other.” We all have the same hopes, fears and dreams – and resilience, if we’re lucky. At the post-film Q and A, Bailey says, “No one leaves their country and gets on a raft to cross the Mediterranean when you can’t swim unless you are desperate.” Where is our collective heart?

Preceded by The Rabbit Hunt  Directed by: Patrick Bresnan

The Rabbit Hunt: Just a few hours southwest of home in Cocoa Beach near Lake Okeechobee, a family carries on a tradition hunting rabbits. Farmers set the sugar fields afire, the rabbits flee, the kids chase down the rabbits, club them to death and then skin them, “process” them and sell them to their neighbors.

The Takeaway: I feel all judgey watching this short film, a story far, far removed from my daily experience. But listening to the Director in the Q and A, I come to understand that this is an accepted cultural and community practice. Exposure sometimes leads to empathy.

For Akheem: Daje Shelton, a charismatic teenager, makes some lousy life choices which land her in a school of last resort, the Innovative Concept Academy, a court-supervised alternative high school for delinquent teens in Missouri, with an unbelievably dedicated staff, who work with each kid individually to help them scale nearly insurmountable obstacles.

The Takeaway: Never, ever doubt the power of one resilient teen and a bunch of committed adults.

Takeaway: I am cold, tired and hungry sitting through this extremely popular program. Trouble Brewing directed by Timothy Heath, about a young goat and a troll and Hot Dog Hands, directed by Matt Reynolds, about a woman who keeps growing fingers, are two favorites.

The Takeaway: I am impressed by how fast the friendly guy next to me with pink and yellow hair inhales his plate of grub.

Young boy harangued by his talented but erratic father to perform in the one-ring, Pickle Family Circus in the 70s and 80s, grows up to perform his story on stage and screen. Exorcises at least some of his demons.

The Takeaway: We find ways to make meaning of our childhoods and if we’re lucky we eventually move beyond them. 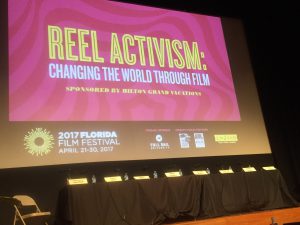 The filmmakers discuss their experiences making films focusing on refugees, peacemakers, and the gay community.

Takeaway: We all belong here and need to recognize our shared humanity. We deserve to be with our families and the people we love. Europeans know what the refugee journey looks like, Americans don’t. Live in the solution, not the problem.

3:45 The Peacemaker  Directed by: James Demo 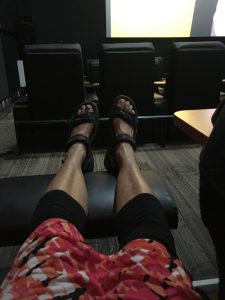 The film profiles Padraig O’Malley, a tall, thin, bearded Irish guy who passes me in my recliner before the film starts and says, “Now, that’s the way to do it.” The film captures decades of his peace-making efforts in Northern Ireland, South Africa, Kosovo, and Iraq, basically using a model that people who have lived in conflict (and reached some resolution) are the best ones to deal with those in current conflicts. We also are privy to Padraig’s considerable internal conflicts and his rock-solid commitment to staying sober.

The Takeaway: We can be deeply, deeply wounded and flawed and still do good work. Focus on our shared humanness and not individual ideology to transcend conflict.

Supposedly a film about the rat problem in Baltimore, but through a variety of innovative film techniques, the film tells a much more complicated tale about institutionalized racism and its lasting effects, first sanctioned by the feds and then perpetuated by community and neighborhood covenants.

The Takeaway: Johns Hopkins Professors, sometimes with good but misguided intentions helped form and institutionalize policies that keep the poor poor and neighborhoods blighted. Rats are but a symptom of deeply distressing government and community policies and entrenched racism. 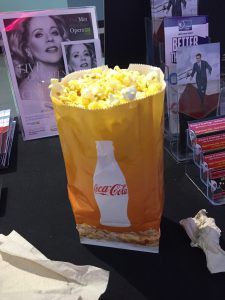 During this film, I munch most of my $8.00 bag of popcorn while I sit comfortably in my reclined seat and watch a segment of our population wax ecstatic about the resurgence of cassettes.

The Takeaway: This is a deeply democratic medium readily available to almost everyone. Zack Taylor is so thrilled to have his film screen at the FFF that after I hit the control to lower the ottoman, which sounds like I am farting as it shifts back into place, I float out into the sultry-late-night air on a cloud of goodwill.

The Final Take Away: This year, the seats are cushier, the popcorn ever more expensive and the interior of Central Florida literally ablaze and 8 degrees hotter than at the coast. Note to self: don’t wear synthetic fabrics next year for the walkabouts in between films. Mostly, gratitude mixes with perspiration as I leave with my mind blown, my heart opened and my perspective widened – again. “Thank you” to: the Enzian, the Regal Winter Park, the dedicated volunteers and all the filmmakers and participants.

“And for me, the movies are like a machine that generates empathy. It lets you understand a little bit more about different hopes, aspirations, dreams and fears. It helps us to identify with the people who are sharing this journey with us.” Roger Ebert, Life Itself 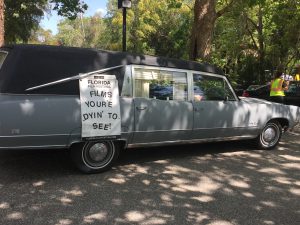 Reader Invitation: What films are you dyin’ to see? Tell me about a favorite from the past or present (or future). I’d love to hear from you.