The Kindness of a Stranger

Last week we had reservations on Amtrak train 69, part of the Empire Service, leaving Penn Station and ending in Montreal. Our stop was Albany-Rensselaer, which we would reach in a little under three hours after a scenic ride paralleling the Hudson River.

But first we had to get there from our hotel, a plain brown, 25-story building bordering the dramatic gothic high rises of Tudor City, across from the United Nations. No big deal. We walked down E. 43rd Street to Grand Central Station and entered next to the Grumpy Café on Lexington Avenue, already teeming with patrons at 6:30 a.m. Our suitcases clacking over the tiled floors, we paused before entering the netherworld of the subway to admire Grand Central one last time, and offered silent thanks to Jackie Kennedy for fighting to restore this grand, old building. 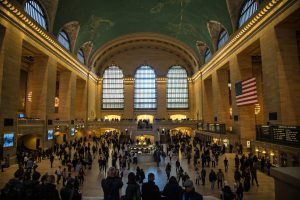 At the subway entrance, we have to swipe Metro cards to get in. This should be no big deal. But, turns out I am swipe-challenged. When we first arrived three days earlier, I locked myself out of the system with my deficient swiping skills. Two swipes and I was out. Jim shook his head as I took my place in the long line in front of the service window and waited for absolution from the station manager. He waved me through the handicap entrance.

Our swiping travails were not over, however. That same day, at another turnstile, I wrestled my body through, but somehow managed to impale my luggage on one of the turnstile spokes. The turnstile refused to budge. The luggage refused to budge. Jim, the more quick-witted of the pair, then swiped with two goals in mind: to free my luggage and to simultaneously shove himself through the turnstile into the station. He meets goal #1, but falls short of goal #2. Now, wifey and luggage are on the inside, but he is on the outside, and locked out of the system. Radiating exasperation, he turns to take his place in the service line.

Sweat pricks our armpits under our heavy sweaters and down jackets in the overheated station as the multitudes stream by. My nervous laughter borders on the hysterical as I wonder if someone is filming us for a new version of the Out of Towners.

And then in what feels like a blink of an eye, we are leaving New York – sated with experiences to savor over the days to come.

On this final morning, we have left plenty of time for all types of travel contingencies. Yet, anxiety presses against me like a sweaty undergarment. When I face the turnstile, I imbue it with malevolence and imagine it is just waiting to lock me out. I glance over at the station manager window. It is dark. A small sign in the window says, “On duty at 7:00 a.m.”

So, I make this last swipe leaving New York City a big deal. But, the Gods shower me with mercy and gift me a competent swipe with a small flourish at the end. I burst through the turnstile and even manage to drag the luggage through impale-free.

Now, it is just a simple matter to take the Shuttle over to 42nd Street. But, where is it? We see “S” signs, but know from past experience, it may be a hike. It is. We shed jackets, tie them around our waists and embark with resolve. We pass a youngster belting out Adele’s, “Hello,” and fall in synchronized step with the throngs trudging to work. Flushed from exertion, we nevertheless put a little skip in our step when we see the shuttle pull into the station. We mind the considerable gap between the car and platform and plop into seats for the short ride to Times Square/42nd Street.

We scurry from the train and follow signs to the 1, 2 and 3. On the platform we stand confused, yet again. We don’t know if it’s okay to take the Express train pulling into the station in two minutes. Jim isn’t going to betray his gender and seek help, so I go up to a young woman who looks friendly and ask, “Does the Express stop at Penn Station?” She hesitates for a minute, and I imagine she is thinking, these people are idiots, but then says, with just a hint of kindness, “Penn Station is a major transportation hub and all trains stop there.” Of course! In that moment, I feel like I do when I watch Jeopardy with my very smart older brother, Bill, who is not only clever and intelligent, but speedy accessing all kinds of arcane information that makes him a Jeopardy whiz and leaves me sputtering in his dust.

We stuff ourselves on to the 2, an express heading downtown and let ourselves be shoved off at Penn Station.

Penn Station is a dump. It wasn’t always that way. Once, it was a Beaux Arts beauty. But, that was torn down and replaced with something so architecturally uninteresting I imagine it blushing over its ugliness and its boring lines, low ceilings, masses of people, glaring lights, insufficient bathrooms, toilets covered with pee (is there a special ring in Hell for women who pee on the toilet seat and don’t wipe it off?), and confusing signage.

Instead of hauling luggage up numerous flights of steps like we did three days before, we look for an elevator. We stand and wait with three older ladies. No one speaks or acknowledges each other. What’s up with that? After we step onto the elevator redolent of piss and tug our luggage in close, I ring out a cheery, “Good Morning.” Two of the ladies don’t alter their set expressions. But the third lady, while she doesn’t crack a smile, she does say, “Good morning.”

We exit: one, two, three ladies and then us. No Amtrak signs anywhere. We stand dazed and confused — again. I pivot 360 degrees trying to get my bearings. And then, the lady in the elevator, the one who said good morning back to my good morning, who is several yards ahead, turns around and circles back. “Where are you going?” she asks. “Amtrak,” I say. She points. I nod and say, “Thanks.” She goes on her way. We go on our way, but reach an impasse once again – the way is not clear. The lady, must have eyes in the back of her head, for she stops again and turns to look at us, establishes eye contact with me and points to the right. I see an Amtrak sign and mouth, “Thank you.” This time she smiles.

Thirty minutes later, after pee stops in the miserable bathrooms, I tell Jim to sit for a spell while I go stand in the line already forming for Train 69 behind a guy with gray hair and a beard. He tells me he makes this trip several times a month, and about his company and his kids and grandkids who live in Chevy Chase and Columbia Heights in D.C. I tell him we had our wedding reception at a restaurant in Chevy Chase and that I still feel strong ties with a church that sits at the intersection of Columbia Heights, Adams Morgan and Mt. Pleasant. I tear up when I tell him this. He must think I am a nut. But, I miss All Souls Unitarian with a palpable ache, even nearly twelve years on. 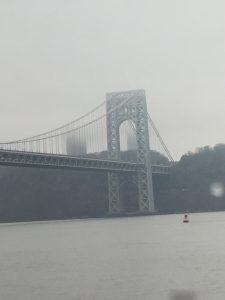 Jim joins us and after we spill off the escalator, the conductor waves us to the front of the train, and the travelers continuing on to Montreal to the back. As the train ascends from the underground, the vertical cityscape shifts to a horizontal landscape dominated by a limited palette of tans and grays and blacks. 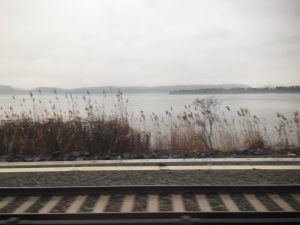 As we settle in to admire the beauty of the overcast gray day whizzing by, I feel a warm, rosy glow for the lady on the elevator who helped two weary, stressed-out vacationers find their way. 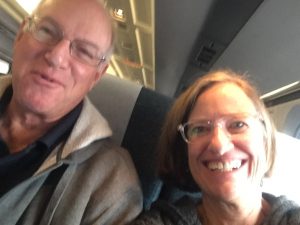 Reader Invitation: Can you relate? What travel interactions have stuck with you? When did you run into unexpected kindness? I’d love to hear from you.

2 thoughts on “The Kindness of a Stranger”