You know that nagging feeling you get that there’s something significant about the day, but you just can’t put your finger on what it is? That’s how I felt this past Sunday – and it throws me off balance and gives me the dropsies. My cereal spoon clangs to the floor on its way to my bowl. My hooped, gold earring rolls under the bureau on its way to my ear lobe.

Just what is it that I can’t remember? This fuzzy-headedness is not uncommon. While it’s not an everyday occurrence by any means, just last week I read a New Yorker article at bedtime, and couldn’t remember what it was about the very, next day. I do remember the article on the Los Angeles mountain lions and the lengths we are willing to go to build them a feline kind of High Line, so they can expand their territories encroached on by developments, and cross freeways without getting smooshed by cars, and mate out of their family and diversify their gene pool so they don’t go extinct in a few decades.

As I write this post, as if right on cue, Cody, our exceedingly handsome cat with a tawny coat not unlike that of his wilder cousins winds around my legs and then whines at the door to go out on the porch. 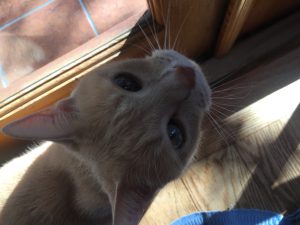 Back to my fuzzy- headedness two days ago. At about 9:40 a.m., on this Sunday morning in late February, which is warm and so overcast that when I dash out to catch the launch when the sonic boom shakes the house, I cannot see it through the soft gray blanket the clouds throw over the sky.

I have a meeting to get to, so I pull on new yoga pants and a long top that I think that marketers call, raspberry. I throw on a long gray cardigan and gray Keds. The sweater is really too much weight, but exposing my upper arms in public feels like an affront to nature, so I sweat instead. So much for embracing aging gracefully today.

At about 10:00 a.m., I exchange pleasantries with a woman I know – not well, but well enough to hug and mean it. She says she is fine when I ask her, but I later hear her say, “My sister died unexpectedly on Valentine’s Day.” Before I leave, I offer her my condolences. She tells me her sister had Parkinson’s, but her death was unexpected, and that she is sad but okay. She is not a woman who likes the focus on her, and there is a pregnant pause between us. Instead of allowing it, and despite knowing better on some intuitive level, I launch into a story about when my mother died, and how right before the memorial service I opened the heavy rental car door into my lip – leaving it bloody, swollen and painful to the touch. I then dabbed at it with a Kleenex all through her service and the prepared remarks I made about our relationship, taking care not to drip blood on my fitted, black sheath splashed with big pink flowers. It was one of those stories I wanted to stop as soon as I started, but I couldn’t figure out how to extricate myself gracefully so I finished it – keeping it mercifully short. My friend smiles indulgently.

As I drive home, a jolt runs through my body that this day, February 19, 2017, is the 6th anniversary of my mother’s death. Oh, my gosh, how did I not remember that? I remember so clearly the day six years ago, February 19, 2011, a frigid upstate New York day with slippery, snow-slicked roads and flurries dancing in the sky. Late in the afternoon, after a weak sun called it quits for the day, my sister-in-law, Claudia, and I grasped hands and prayed my mother off to wherever the dying go. Claudia let out an involuntary yelp, tinged with ecstasy (maybe glimpsing the hereafter?) while a distinct jolt rocked my body – not unlike the jolt I feel today when I remember that I forgot to remember my mother’s passing.

But, I suspect that’d be okay with my mother.

I think of her often and say aloud, “I miss you, momma,” at all sorts of odd times – like when I walk on the beach spearing trash, or when I pull out my Betty Crocker cookbook with the broken binding and turn to page 305 to make a pie crust and see her handwritten recipe for chocolate bittersweets, and when they are wheeling me through the meat-locker-cool corridor that smells like coffee on the way to cataract surgery in the operating room where the Spinners are piped in singing, Then Came You, Then Came You. 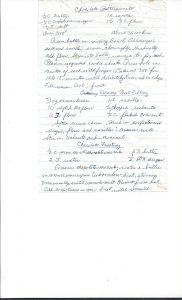 Mostly, I think of her when I slip on her wedding ring, a thin gold band, before I slip on my own wedding ring, which I got out of the habit of wearing when I worked as a massage therapist. But, I slip it on when I go out, and often wonder, just when did my hands become just like my mother’s? Although, they aren’t really, hers were bent with arthritis, which I don’t have, but we do share the kind of thin-skinned, blue-veiny look that telegraphs my age. 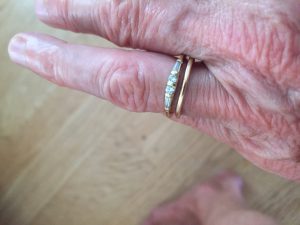 I slip on her ring whenever I visit doctors and when I am nervous about what they will say or recommend procedures I probably won’t want to do, or when I travel and am afraid that the plane will go down in flames. I want my mother near me – even though she didn’t know me for many years before she died, ever since Alzheimer’s gunked up her brain. But, I knew her – and I suspect that on some level beyond our conscious awareness she did still know me – at least that’s what I like to tell myself.

I’ll probably forget all sorts of important dates in the future, but I’ll always have my mother’s ring to slip on and comfort me whenever I need it.

Reader Invitation: Tell me about your memories. What symbols or objects or talismans do you have that give you comfort? Please share.

I will usually respond to your comments within 24 hours.

8 thoughts on “My Mother’s Ring”