A day after the election, I open a message from a friend on Facebook about a women’s march in DC the day after the inauguration. Details are sketchy, permits are pending, but I am bereft, and go on line immediately to book a hotel in DC. My favorites are sold out or over $500 a night. I settle for a room in nearby Shirlington, VA, but worry that the subway won’t be able to keep up with the crowds. I tell myself that’s just a detail that will likely work out if I can just trust the process.

I complain to my husband, Jim, about the timing: “Why would they schedule the march that weekend when hotel rooms are hard to come by, the metro will be taxed and the city stuffed with inaugural attendees?”

Then Jim tells me he doesn’t want to go. “DC is cold in January,” he says. Should I push it? He often resists travel at first, but then a switch flips and he is not only willing but enthusiastic. We have never once regretted a trip.

Then I go to the eye doctor on December 2nd. I start to sweat in the air-conditioned cool when I can’t read more than the giant E with ease on the chart across the room. My vision has deteriorated dramatically in 6 months. The good doc recommends cataract surgery as soon as possible, but it gets pushed to January 9th and 23rd due to the holidays.

Surgery #1 goes off without a hitch. Louise, Barbara, Sue and Dr. Ravin take excellent care of me. I ask for drugs to get me through the next four years. They laugh, “ha, ha,” like they are hearing this joshing for the first time. The next morning, I am stunned by the glowing amber of the olive oil sitting on the counter. Who knew colors could be so vibrant?

My vision is greatly improved, but I am still nearsighted. I cannot see into the distance. My brain is confused and I cut corners, smash shins and clunk a cupboard door into my mouth, which I am sure has chipped my front tooth. But, no it’s okay, just sensitive now to hot and cold and the stiff breezes that blow as I go out to get the mail.

Meanwhile the march gains momentum, permits are secured and large crowds anticipated. I want to go but start to worry about those large crowds, the unreliable subway system, my healing eye and the other one scheduled to go under the knife two days after the march.

I cancel the trip.

My father, husband and brother all say, “You made the right decision.” But it doesn’t feel right. Of course, none of them are women and two of them are unlikely to ever protest, rally or march. They aren’t insensitive monsters, or even careless about our democracy or equal rights, activism just isn’t there thing.

My eyes whisper, “Thank you,” for not adding more stress.

I glue those eyes to the computer on march day. Tears leak out as messages flood in from friends and when I see the magnitude of the gathering gone global.

I feel like a ping-pong ball smacking one side of the table to the other. Just the day before I sit at this same computer listening to the inauguration address ripped straight from a post-apocalyptic hellscape from a man who scares the bejesus out of me. No aspiration, no inspiration, but lots of fear mongering from an authoritarian serial liar. My heart hurts. As the Obamas take off in the helicopter from the Capitol, I picture myself hanging off the bottom, screaming, “Please don’t go.”

I am tired of people saying, “Get over it, stop being a sore loser.” It’s not about LOSING. It’s about this man and his advisors and his platform of hate and exclusion and bullying and predation of women who now sits in the White House. I am especially concerned about the deliberate manipulation of truth and the haranguing of the press. Absent a YUGE transformation, it’s unlikely I’ll ever like or respect the man. But, that’s okay. I don’t have to. But that doesn’t mean I don’t want the country and democracy to succeed. I do.

We need change. While he’s not my choice, he is a change agent. He’s what we’ve got – for now. I don’t know how it’s all going to play out, even with my new and improved, clearer-seeing eyeballs.

Still, it ain’t up to one man, no matter how much a bully. He works for us. It’s up to us. And, leave it to the ladies to shift the energy. Didn’t they pray the devil back to hell in Liberia and end a bloody civil war? 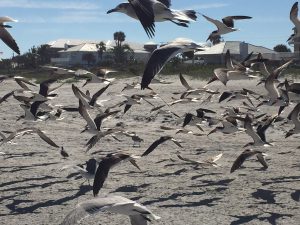 On Saturday, just one day after the inauguration, while millions march all over the globe for justice and peace and inclusion and human rights and economic fairness, I slip out for a walk on the beach. A fishing boat dots the horizon, a wet-suited-surfer bobs on the waves, and birds squawk and rise as I approach them. I feel a shift, a tangible, something-with-mass shift and say out loud, “Oh, this is what hope feels like.”

So, thank you. Thank you, Claudia and Allison, Cindy, Anna, Janna, Jonathan, Nedra and Bruce, Marc and Orly, Roberta, Judy, Deborah, Laura and Barbara, Edrianna, Rob, Michael, David and the millions who marched. Thank you for reminding me to trust the process – the timing was perfect.

8 thoughts on “Thank You, Marchers”